The Project on the History of Black Writing staff member, Christopher Peace, recently attended the 2021 ZORA! Festival of the Arts and Humanities as a third time graduate intern. Due to COVID-19, the festival was different from past years, taking on a hybrid zoom and socially distanced format. Peace recaps his experience with the festival this year, noting the differences from past festivals, as well as what he learned from this opportunity.

The 2021 ZORA! Festival of the Arts and Humanities began online weeks before I traveled to Eatonville. It was January 7, Zora’s 130th birthday anniversary. NY Nathiri, the executive director of Preserve the Eatonville Community (P.E.C.), invited me to a Zoom gathering for Zora’s birthday and asked me to give a toast. I received a fancy Zora box with a gluten-free cupcake and sparkling apple cider (this sample got me hooked on sparkling apple cider—I buy it every week now). The DJ really made this event stand-out, encouraging people to groove to the old school and newer musical selections. Zoom did rounds of spotlights where your camera would be highlighted on the main screen for all in the room to see, which was a convincing impetus to get us dancing and smiling. Toward the end of the evening, it was my turn to give a toast. Due to impressive scholars like Valerie Boyd and Trudier Harris being present on Zoom, I was a bit nervous to say my part. I began my toast thankful for my involvement with the ZORA! Festival and for Zora’s guidance in multiple areas of my life and I ended with my favorite quote from Their Eyes Were Watching God:

She saw a dust bearing bee sink into the sanctum of a bloom; the thousands sister calyxes arch to meet the love embrace and the ecstatic shiver of the tree from root to tiniest branch creaming on every blossom and frothing with delight. So this was a marriage!

Unbeknownst to me, this quote would come to represent a different spark, a coming-together, for my engagement with Hurston, Eatonville, and the festival. The drive to Eatonville was smooth, with not as much traffic as the other times I’ve visited the city. My third time as a graduate intern attending the ZORA! festival was drastically different from the previous festivals. Due to COVID-19 restrictions, most of the communal aspects that defined regular festival experiences were held in digital or non-contact spaces. However, the warmth of the people of Eatonville and the dedication of the ZORA! Festivals to highlighting culturally centered engagement remained ever-present as this year’s attendees adjusted to safer protocols of engagement.

With COVID-19 changing the festival’s environment, Mrs. Nathiri informed me that my work with the festival would be geared toward “art administration.” After my third time at the festival, Mrs. Alice Grant, a long-time participant and curator of events, gracefully offered me a place to stay. For the most part, I worked with statistical data of various festival and P.E.C. audiences on Mail Chimp and on the ZORA! Festival website. I reported on the percentage of individuals opening and reading P.E.C. newsletters. I and others discussed ways in which the festival’s online presence could be more effective. All these tasks were very practical for me due to their attention to statistics and real-time audience participation as digital and public audience involvement are some of the major elements of my studies in the field of rhetoric and composition.

The “humanities” aspect of this festival has always been my favorite. For the 2020 to 2024 cycle, the theme of the festival is Afrofuturism. This year’s focus was “Afrofuturism—What is the Sound?” To discuss these sonic themes, the University of Central Florida hosted a 2-day conference curated by Dr. Julian Chambliss, professor of English at Michigan State University and ZORA! Festival National Planner. This conference was inspired by Hurston’s legacy of valuing the voices and sounds of Black culture and married elements of futurism or science fiction to the oral tradition and music technology evident in Black history and culture. On the first day of the conference, keynote speaker Dr. Toniesha L. Taylor, associate professor of communication and rhetoric at Texas Southern University, presented “Mocked to death by time: Zora Neale Hurston as the sound of Afrofuture present past to future past.” Dr. Taylor’s insight on time’s cyclical movement between future, past, and present was truly astounding as she connected this concept to Hurston’s ethnographic work. The conference also provided an open-access Afrofuturism syllabus along with a collection of open educational resources (OERs) for the festival’s 2020-2024 Afrofuturism Conference Cycle.

This year’s festival structure allowed me the time and space to experience parts of Eatonville I’d never seen. Mrs. Cynthia Haywood, who is an Eatonville native and museum secretary, and I led four visitors on a tour to different parts of Eatonville. Our first stop was a beautiful mural wall done by various artists that displayed Zora and other vivid images. Next, we stopped at the Moseley House, the second oldest building in Eatonville which now serves as a museum. A sign on the outside of the house reads “Zora Slept Here.” We left the museum and crossed the street to visit one of the most historic churches in the U.S., St. Lawrence A. M. E. Church. Large paintings of the Lord’s Prayer artistically reimagined were hung around the wall of the church. I purchased postcard versions of those paintings to take with me.

The festival concluded with a drive-in movie night, featuring Spiderman: Into the Spider Verse and The Best Man. I think drive-in movies should return for the time being because this was a great socially distanced idea that yielded an impressive turn out. Ultimately, this festival was a blast, even in the midst of the pandemic.

Interested in learning more about Zora Neale Hurston? Apply to our NEH Virtual Summer Institute “Hurston on the Horizon; Past, Present, and Future”. “Hurston on the Horizon” will provide an in-depth multidisciplinary reassessment of the works of Zora Neale Hurston (1891-1960), as well as her impact on contemporary practices and central themes within academic and public discourse. Spots available for 25 college/university educators. The deadline to apply is March 1, so apply today! 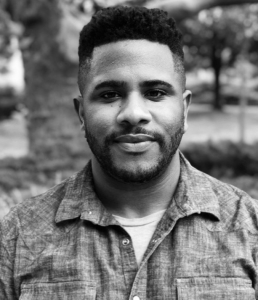