Jericho Brown is the winner of the 2020 Pulitzer Prize in Poetry for The Tradition (Copper Canyon Press). 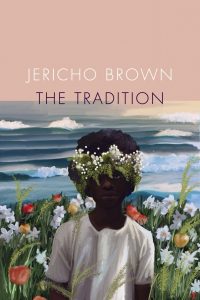 Beauty abounds in Jericho Brown’s daring new poetry collection, despite and inside of the evil that pollutes the everyday. A National Book Award finalist, The Tradition questions why and how we’ve become accustomed to terror: in the bedroom, the classroom, the workplace, and the movie theater. From mass shootings to rape to the murder of unarmed people by police, Brown interrupts complacency by locating each emergency in the garden of the body, where living things grow and wither—or survive. In the urgency born of real danger, Brown’s work is at its most innovative. His invention of the duplex—a combination of the sonnet, the ghazal, and the blues—is an all-out exhibition of formal skill, and his lyrics move through elegy and memory with a breathless cadence. Jericho Brown is a poet of eros: here he wields this power as never before, touching the very heart of our cultural crisis.

Jericho Brown has received fellowships from the Guggenheim Foundation, the Radcliffe Institute for Advanced Study at Harvard, and the National Endowment for the Arts, and he is the winner of a Whiting Award.  Brown’s first book, Please (New Issues, 2008), won the American Book Award.  His second book, The New Testament (Copper Canyon, 2014), won the Anisfield-Wolf Book Award.  His third collection is The Tradition (Copper Canyon, 2019). His poems have appeared in Bennington Review, BuzzFeed, Fence, jubilat, The New Republic, The New York Times, The New Yorker, The Paris Review, TIME, and several volumes of The Best American Poetry.  He is an associate professor and the director of the Creative Writing Program at Emory University.

Professor Brown was a Virtual Scholar for HBW’s 2015 “Black Poetry After the Black Arts Movement” program funded by NEH.  HBW presented “A Conversation with Jericho Brown” as a webinar in fall 2015.