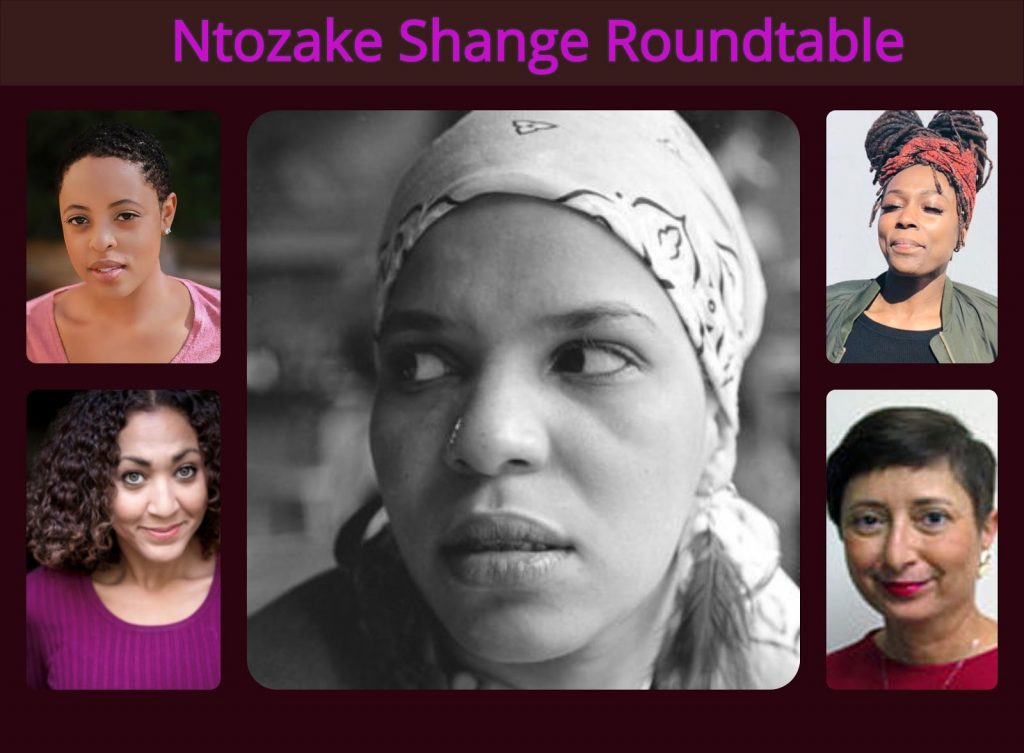 An outpouring of love on social media followed the news of Ntozake Shange’s passing on October 27, 2018. A pioneering poet, playwright and novelist, who broke the rules of conventional theatre with her critically acclaimed  for colored girls who have considered suicide/when the rainbow is enuf, Shange continues to inspire generations of women writers who come after her.

Shared mourning from women scholars, writers, journalists, and activists alike is not only a testament to her important legacy but also speaks to the untold numbers of young women who could see themselves in the rich tapestry of stories, emotions and experiences she created through her work.

That same sentiment was evoked when The Project on the History of Black Writing asked women from the University of Kansas, current and retired faculty, graduate students and poets, to share their thoughts about Shange and her work. Some of their responses follow:

What was your first introduction to Ntozake Shange? 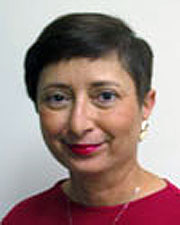 “My first introduction to Ntozke Shange was seeing a production of for colored girls have considered suicide/when the rainbow is enuf that was staged by University Theater in Murphy Hall.”- Dr. Janet Sharistanian,  Professor Emerita, KU English; founding director, KU Women’s Studies Program (now the Department of Women, Gender and Sexuality Studies. 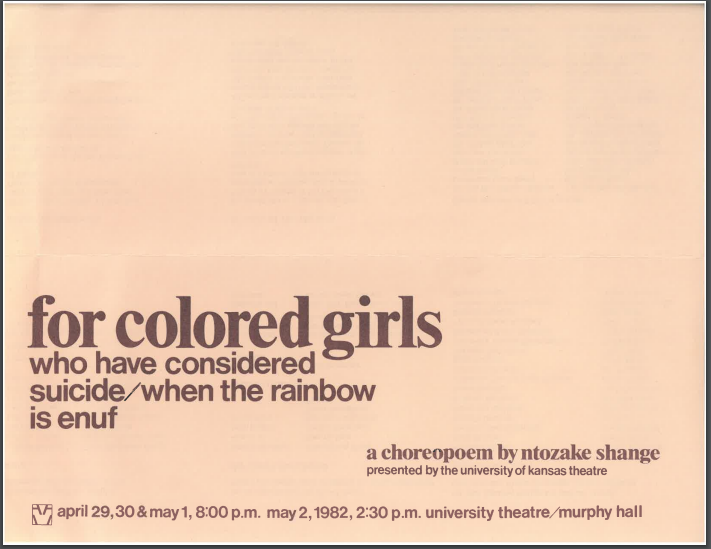 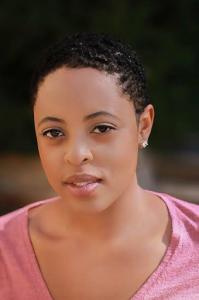 “While I was an undergraduate student at Spelman College, Tyler Perry’s film adaptation of For Colored Girls came out. I used to go to most of the panel discussions and lectures that our department hosted, and I remember there was one held on the Perry’s film and Shange’s original play. What sticks out most about that conversation was the disagreement about whether it anyone would do the film, especially Tyler Perry. Perry, of course, was most known for his “Madea” character in a series of films. For most, I don’t think the issue was necessarily about Tyler Perry (although there were some who questioned his artistic merit) but moreso about black women protecting one of our own. Like most things in American culture, the release of this new film was complicated. On one hand, many wished Perry had included Shange or other black women writers more in the process and had stayed truer to the original text. On the other hand, there were many who understood that the film would give Shange the attention she deserved and would provide her some financial support, since she was ill at the time. I hadn’t read her work yet, but I did see the film shortly thereafter. I remember thinking that it was the most creative film I’d seen by Tyler Perry. It wasn’t perfect, but I found it interesting. Overall, I appreciated the casting and the cinematography. I finally read for colored girls who have considered suicide/when the rainbow is enuf as a MA student at KU. I read it for a Black Arts Movement course. I read it multiple times, and I wrote my final paper on it. I believe it was during that academic semester, or the next, there was a production in Kansas City. So, I got to see it staged. It is one of my favorite performance pieces. It might even be my favorite.”- Alysha Griffin,  PhD student in Theatre and current HBW affiliate

Why do you think Shange’s work resonated with so many black women? 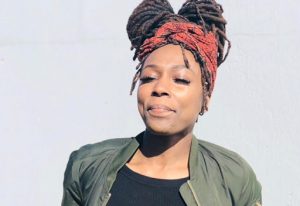 “I think many black women can see themselves and their experiences in Shange’s work, especially in for colored girls. . . . And I think it was about seeing themselves and witnessing resilience and resistance — her work honors black women’s complexities as well as their complex strategies toward healing and political and personal autonomy.”- Simone Savannah, Academic Services Coordinator, KU McNair Scholars Program, PhD, English 2017. 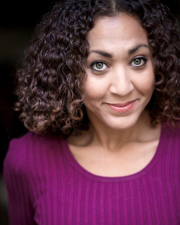 “I really think it’s because it was so concentrated. Her work also resonates because it is so urgent. It is still so urgent today. From the poetry to the novels to the children’s books everything fits a particular moment yet remains timeless. It is very concentrated, opaque work.  People focus on different parts of for colored girls. . . be it the dancing, or the music, or the way she writes on the page. I can just see her doing the piece in bars and disrupting space to say “we are here. . . .” But rarely do we think of her as a virtuoso. She’s like Ellington. Her work was a series of jam sessions on the page/where every part matters. The dashes, the commas, the colors….that’s what I see in the work now—her audacity.” – Dr. Nicole Hodges-Persley, Associate Dean for Diversity, Equity and Inclusion,  College of Liberal Arts and Science; Associate Professor of Theatre

“Because it’s honest. It captures many of our experiences as black women. Shange takes the history and culture of black women across the diaspora and boils it down until she has a concentrated aesthetic. There is no question of who she writes for and why she writes. Not only that, there’s a spiritual quality to her work. That production I saw in Kansas City felt like a church service being held in somebody’s kitchen. Even in a theatre in the midwest, it felt like home. She’s one of the women in our tradition who sees love—be that self-love or love community– as radical.” – Alysha Griffin

What does for colored girls who have considered suicide/ when the rainbow is enuf mean to you?

“for colored girls is a survival kit for black women. It really maps prescriptions for how we can manage and contain our trauma. It tells us how we can address pain in  manageable doses that are so concentrated that if we do too much, we might not be able to take it. That’s why she talked to us with dance. She needed dance and we need dance to say what cannot be said on the page.  I need primary and secondary colors and their forms to cover the pain so that I can live through to the other side of the rainbow. She lets us say we hurt and we love out loud in that play as unapologetically black female magic. We have so much to say in that choreopoem. There was not a form, outside of the blues, that could contain our black woman pain until Shange. We are screaming and yelling and living and hoping and dreaming on those pages. For colored girls is freedom for so many artists like myself. She gave us permission not to apologize. To be bold. To break forms to find new ones. I loved her for that.” – Dr. Nicole Hodges-Persley

“It was a path-breaking play in its combination of subject and form.”- Dr. Janet Sharistanian

“It means being able to write openly about my life as a black woman. It means sisterhood and power/empowerment. It means movement and expression. Mdny of my poems were inspired by the choreography and monologues – the moving and speaking through experience.”- Simone Savannah

“There are so many parts of that choreopoem that I think about regularly. It’s in my body now. I compare it to memorizing Bible verses. Maya Angelou’s “Phenomenal Woman.” Nikki Giovanni’s “Ego Trippin’.” These little pieces I just carry around with me to remind of who I am and whose I am. If I ever have a daughter, we will read that piece together often.”- Alysha Griffin

What is your favorite Shange quote?

“‘I found God in myself and I loved her I loved her fiercely.’ I love this quote because it expresses this power of self-love, the will to love and honor myself as a woman and creator.”- Simone Savannah

“Gimme me back my stuff…”- Nicole Hodges-Persley

“I found God in myself and I loved her fiercely.” “It’s not very original, but I, again, carry that line with me. It’s right between Zora Neale Hurston’s ‘I love myself when I’m laughing and then again when I’m looking mean and impressive,’ and the last  stanza of Mari Evan’s poem ‘Celebration’, ‘I will be bringing you someone whole/ and you will be bringing me someone whole/ and we be twice as strong/ and we be twice as true/and we will have twice as much/ of love/and everything.’ I love those words so much! I can get distracted by little things that don’t matter. I can beat myself up. And one of these lines will pop into my head and offer piece of comfort. Those lines and many from the choreopoem have become personal mantras.”- Alysha Griffin

How do you think we should remember Ntozake Shange?

“I think we should remember her as a trailblazer and a fine writer.” Dr. Janet Sharistanian

“Being a writer and performer is something I’m learning to accept. I’m breaking those titles in. So, for me, I won’t be able to do my work without remembering that I stand on her shoulders. I think she’s set a paradigm for me as far as aesthetics. As a community though, I think we can honor her by celebrating her and all of her work. We should perform it. Read it. Put her canon in conversation with other American writers, with other black women in the diaspora, and women globally. I think she would want that.”- Alysha Griffin

“As the life-changing maverick that she was, is and will continue to be. She has mapped our future in the gap of her work. We just have to find all the clues she left for us. We must.”-Dr. Nicole Hodges-Persley