I need to visit those who weigh heavily on my mind.  As a result of the progression of years and the busyness of daily living, I don’t always get the opportunity to reach out.  For the past two or three months, however, I have constantly considered stopping by my former poetry professor’s house, which is only about eight minutes from mine.  My former professor Gerald W. Barrax, one of my mentors, is always teaching me.  In fact, I return to his poetry books from time to time, because they unfold with courage, grace, hope, intelligence, music, and power.  In the waxing and waning of time, of course, I know it doesn’t slow for me or anybody else.  After all, a person has limited time.

On the ninth day of December, as I write these few paragraphs, I listen to the local news.  It is not unusual to listen to the news, except I don’t usually know anyone on it.  This cold, foggy morning, I hear my former poetry professor’s name Gerald Barrax.  I am able to sit up straighter.  I can’t believe this sad news that he got hit by a car.  I can’t believe he died.  I can’t believe I haven’t talked to him in a couple of years since the time I saw him with his daughter, shopping for groceries.  I remember him introducing me to her.  I remember her telling me that she was taking good care of him.  Later on the evening news, I hear that he was in the crosswalk.  I think he was out walking.

Moreover, I remember talking to another one of my mentors Dr. Jerry W. Ward, Jr. and telling him that my former poetry professor Gerald Barrax had been on my mind.  I also remember telling him that I have been considering visiting him and that I look toward his street whenever I pass it.  For some reason, I didn’t stop to visit him.  Maybe it’s because a friend keeps telling me that you don’t stop by someone’s house nowadays as we did decades ago.  I wonder what has all of the technology done to us.  I wonder about not visiting, not calling on the phone as much, and not handwriting letters.  I think it might be the pacing of society that pushes me and others onward to task after task rather than spending more time with others.

And yet, I know I live only 8 minutes from my former poetry professor.  But I would simply look in the direction of his street whenever I passed it.  I recall how he pointed out good details in poems in class.  I also recall how each of us students had fifteen minutes for the reading and workshopping of our poems.  How clearly I remember my Advanced Poetry Writing Class in the Spring 1989 semester and my Graduate Poetry Workshop with Professor Barrax and the time clock he used, because the time was a major factor.  I can easily recall how insightful the critiques were.  In the Beginning Poetry Writing Class in the Fall 1988 Semester, however, I  can still see how my classmates were as eager as I was to write poetry and receive his feedback.  Although these memories are as fresh as just baked muffins, I marvel at Professor Barrax’s poetry books and share literary news about his work with the Carolina African American Writers’ Collective and the Washington Street Writers Group.  By the way, my Graduate Poetry Workshop classmate Bruce Lader and I are co-founders of the Washington Street Writers Group.  Because we seem to want to continue workshopping our poems after the semester class, the Washington Street Writers Group would blossom.  Later in an email from the Washington Street Writers Group members about Professor Barrax’s Friday funeral, I read Bruce Lader’s message, informing us that it was Professor Barrax’s idea for us to start the writers’ group.  Yes, I remember enrolling in those English classes at North Carolina State University.

Moreover, I think many people already know that I got the idea to start the Carolina African American Writers’ Collective while taking Professor Barrax’s Advanced Poetry Writing Class.  I would inform my classmate Janice W. Hodges about my plans to start a writers group, The Collective or CAAWC, because she and I had to explain cultural references in our poems to other classmates, though there were good poets in the class.  I think it takes time away from one’s critique of his or her poetry by explaining cultural references and/or historical references.

When I ride on Hillsborough Street past North Carolina State University, I still look toward Tompkins Hall where the English classes and poetry readings are held.  I still remember the poets whom Professor Barrax invited to teach workshops to some of us: Gwendolyn Brooks and Miller Williams.

In regards to the fleeting time, it is now nighttime.  I am driving home from K & W Cafeteria.  Although I already know Professor’s daughter who several years ago taught at the University of Mount Olive, where I teach, I do not stop by his house.  I want to pay my respects to his family, but he just died over the weekend, December 7, 2019.  When I pass his street, again I turn toward it, knowing my late daughter’s elementary school is near there.  Once again, I realize that it is the twenty-first century; so I wonder about stopping by his house without calling first.  I plan to re-read a poem that I wrote more than two decades ago, depicting one of Professor Barrax’s poetry readings.  I also plan to re-read his poetry books and continuing teaching them in my workshops.

In these time when I get to live, learn, and love, I realize the importance of not simply keeping to myself.  I call my mentors Dr. Jerry W. Ward, Jr. and Eugene B. Redmond.  I also call my friends Bridgette A. Lacy, Dr. Joanne V. Gabbin, and Gina Streaty.  Each one of us is a writer.  Like my daily writing, I will not delay my greetings.  Lastly, I wanted to attend my former Poetry Professor’s funeral on Friday, but I was scheduled to administer final exams on Thursday and Friday.  Maybe these words will bring solace somehow. 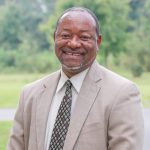 Lenard D. Moore is an Associate Professor of English and Poet-in-Residence at the University of Mount Olive. Moore is also the director of the UMO Literary Festival.