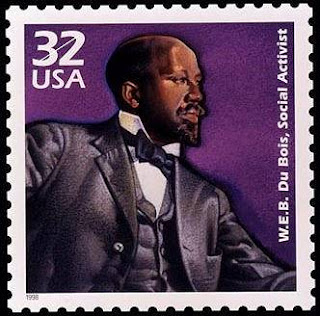 While W.E.B Du Bois is most known for his text, The Souls of Black Folk, he occasionally constructed works of fiction. “The Quest of the Silver Fleece”, has the same message of black consciousness and highlighted the repressive and reductive systems of white social control.  The main character, Blessed “Bles” Alwyn, negotiates between the physical binaries of north and south, the urban contrasted to the rural, and the metaphoric binary of an oppressive wasteland and the promised land.
His protagonist, Bles, clearly lives up to his name; he has the ability to navigate both physically and socially through the physical and social landscapes between class, colour, and static, problematic landscapes.  He initially finds the rural landscape, and how black people have to enact to be considered successful.  His relationship with Zora is extremely problematic; he considers her past and role in society something to flee from and heads North, to an upwardly mobile class, career, and section of blackness to entertain and be entertained by.  While working on a senatorial campaign, he falls in love, but is more and more disturbed by the moral compromises that Blacks must make to obtain social success; far too often their cultural roots and personhood is negated for the love of money and social position.

Bles’s personal journal is placed against the backdrop of social and racial injustice.  The landscape, both Northern and Southern, is practicing the idea that the emancipation that slaves experienced was in name only, and the social, economic and cultural system of the day was still beholden to the silver fleece of cotton.  The economic and social systems of government regulation and cultural access are still functioning under this assumption, and of course, the black body is continually denied access to the franchise.  Bles learns that labour under this system, whether work of the tongue and mind or of the back and brow negate the black body and bend it to breaking.