HBW joins the national commemoration of the centennial of the Tulsa Riots of 1921. Also referred to as the Tulsa Massacre, the Greenwood community in Tulsa, Oklahoma was considered a mecca of Black economic and cultural growth at the time.  On May 31, 1921, “Black Wall Street” – as it was called – was attacked by a mob of armed white rioters. Local businesses, homes, schools, churches and countless other community establishments were burned to the ground. An estimated 300 people died as a result and over 10,000 people were left homeless. The event is recognized as one of the most horrific acts of racial violence against African Americans in the 20th century.

My relationship with Tulsa’s Greenwood Community massacre came through my grandmother as part of a package of stories and reminiscences from growing up with family members. The hardest thing is . . . she told it to me because she knew I would never get that information in any other way.  It was a history that, like the Greenwood community itself, there were active attempts to erase,  She knew it was secretive work, and my grandmother had to encode for me, supplementing things so I could understand how I became a little black boy in the world.

When I started the research for False Creeds around 2005, the graduate students who had been doing their research in the late 1980s had received death threats.  That is the value of archives, our storytellers and people doing humanities work.  While I am glad that “Watchmen,”  “Lovecraft Country” and other pop culture creations are taking this up, it’s important to remember that my grandmother, her siblings,  and her cousins who told my cousins who told those graduate students all knew it was dangerous work . . . It IS dangerous work.” 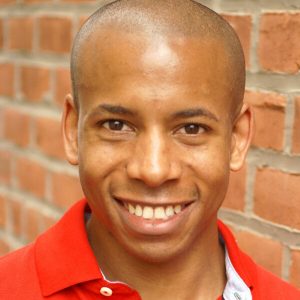 Darren Canady is a Topeka Kansas native who graduated from the New York University’s Tisch School of the Arts. Canady returned to Kansas to join the English Department at the University of Kansas, where he teaches playwriting. A thriving career with more than fifteen staged productions and a host of residencies, Canady’s searing narratives often display a comic undertone, taken from stories that he grew up listening to. He imparts the same sense of life, exuberance, and expressiveness to his award-winning plays. Written against the backdrop of Jim Crow, the Great Migration, and the Civil Rights Movement, Canady’s performances champion the unique culture of African-American life in the Midwest. Although at home in the Kansas Heartland, he and his plays travel widely — the US, Europe, and Asia.

False Creeds “tells the story of Jason, a young man who embarks on a journey to discover the legacy of his family’s past.” Set in 1921 in the Greenwood district of Tulsa, the play follows Jason as he relives the night of the Tulsa Massacre through the eyes of a young girl, Jason’s grandmother. The award-winning play premiered on Feb. 9, 2007 in Atlanta, Georgia at the Alliance Theatre.

The full interview will be forthcoming on HBW’s blog.

In commemoration of the centennial, MSNBC’s Trymaine Lee conducted interviews with Greenwood residents for “A Conspiracy of Silence.”  Black Tulsans are left asking, “What does justice look like after 100 years?” Watch the documentary HERE 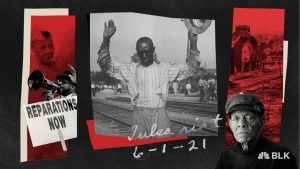 Also check out Red Summer and Tulsa: The Fire and Forgotten, two documentaries on the Tulsa Riots which feature DeNeen Brown, a KU School of Journalism and Mass Communications alum. Brown now a distinguished professor at the University of Maryland, will be covering events in Tulsa for the Washington Post, and you can find some of her articles down below. You can watch Tulsa: The Fire and Forgotten HERE . Red Summer will premiere on Hulu and National Geographic on June 18-19, but you can check out the trailer HERE .

Links to further information on the Tulsa Riots

In Tulsa, solemn remembrances of a century-old race massacre by survivors and descendants (2021)

A Century After the Race Massacre, Tulsa Confronts its Bloody Past NPR (2021)

Tulsa’s Black Wall Street Before, During and After the Tulsa Race Massacre History (2021)

Tulsa Race Massacre Goes From ‘Too Obscure’ to Hollywood Spotlight (2020)

We look like men of war: Africana male narratives and the Tulsa Race Riot, War and Massacre of 1921 (2002)

When more than property is lost: the dignity losses and restoration of the Tulsa Riot of 1921 (2016)

Unearthing the True Toll of the Tulsa Race Massacre (2020)

Photographing the Tulsa Massacre: A Conversation with Karlos K. Hill (2021)

The Tulsa Race Riot of 1921: Toward an Integrative Theory of Collective Violence (2011)

Black Birds in the Sky: The Story and Legacy of the 1921 Tulsa Race Massacre by Brandy Colbert (2021)

Across the Tracks: Remembering Greenwood, Black Wall Street, and the Tulsa Race Massacre by Alverne Ball (2021)

The Tulsa Massacre of 1921: The Controversial History and Legacy of America’s Worst Race Riot by Charles River Editors (2020)

Black Wall Street 100: An American City Grapples with Its Historical Racial Trauma by Hannibal B. Johnson (2020)

Black Wall Street: From Riot to Renaissance in Tulsa’s Historic Greenwood District by Hannibal B. Johnson (2014)

Riot and Remembrance: The Tulsa Race War and Its Legacy by James S. Hirsch (2001)