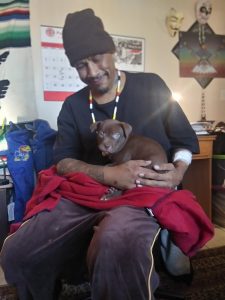 Anthony Sanchez-Day was born on 21 July, 1974, in Topeka, Kansas, and died 5 March, 2021, at the University of Kansas Medical Center in Kansas City.  He had a number of serious health issues.  He graduated from Grand River Academy in Ashtabula, Ohio, and attended Haskell University in Lawrence, Kansas.  He was a member of the Prairie Band Potawatomi Nation.  He is buried at the Dance Ground Cemetery on the Potawatomi Reservation in Mayetta, Kansas.  He leaves behind a son, Ontario, and a daughter, Ana.

At the end of “Taking on Life,” the title poem of his first book, he wrote about his friend who had just “walked on”:

Until next time, my friend, when our paths

you at the Sundance, attached to that tree

pierced through the chest with bone, blowing

your whistle to the sky, taking on life.

Even though he was often vastly outnumbered by enemies on the outside and by demons on the inside, Antonio took on life.  He fought against racism as a boy as one of the few minority students at his high school; fought against family troubles; fought as a street soldier for his gang which was for him the “family” he’d always wanted.

Then he had to fight to simply survive in “The System” as he called it, thirteen years of incarceration in which he often felt himself to be confined in the “basement of the basement,” as he’d tell us.

I met Antonio in 2013 when he was finishing up his prison time, determined to turn his life around. His only weapon against all the enemies lined up against him was his pen, and Antonio wrote brilliantly.  How many times did I sit in a classroom with him and experience the response to one of his poems: awed silence then one brave soul speaking up: That’s how it is, man, you got that, and everyone in the room nodding, saying, Yeah, you got that.

Antonio wrote about the hard times of his life, but he wrote about the joys of life too, the pleasure of simply walking down Massachusetts Street in Lawrence, Kansas, in good weather, running into friends, greeting a friendly dog or two!

Ronda Miller, poet and former president of the Kansas Authors Club, described meeting Antonio for the first time: “I noticed his humble nature, twinkling eyes, and his kind smile.  He seemed at his happiest when he was presenting his poetry.  He always went out of his way to assist others, even when he wasn’t feeling well.  I never heard him complain.  He was a gifted man in numerous ways.”

Journalist Katherine Dinsdale wrote articles about this remarkable poet for Lawrence magazine. She thought of him as “a brave miner, courageously following his pickaxe of a pen into unexcavated darkness.  What he uncovered would send weaker men running for the hills.  But he sought out and shared for too short a time a holy vein of pure gold.”

KU graduate student Ayah Wakkad, who joined the jail writing class as co-instructor, wrote: “Antonio left us too soon!  My only condolence is that his impressive collection of poetry, Taking on Life, will immortalize him as a gifted Native American poet and storyteller, who challenged his past, present and future.  Antonio left us too soon, but the effects of his words remain.”

Retired business journalist and writer Mike Hartnett, who’d worked closely with Antonio in the writing class at Douglas County Jail, wrote about him:

When Antonio was serving his second prison sentence, he decided to turn his life around.  He joined a writing group at the jail and found his true calling and passion.  This all lead to the publication of his first book, Taking on Life, and his work on the Criminal Justice Coordinating Council and his work as co-leader of the Douglas County Jail men’s writing class.

What a life you have lived.  Your words are beautiful/and they are smooth as pure silk./You have seen such darkness and tribulation.

Through your writings we have/been given a chance to see/inside you.  Your words have such/meaning to me, I feel them.

As a fellow outcast, my heart is/sad to hear of your body’s troubles./Your mind is clear but your body/is not following suit./Thinking of you, my friend, wishing you well/on your journey. 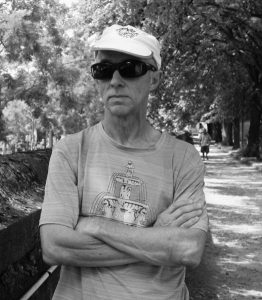 Dr. Brian Daldorph teaches creative writing at the University of Kansas and Douglas County Jail.  He has taught in England, France, Japan, Senegal and Zambia.  His most recent books are: Kansas Poems (Meadowlark P, 2021), Words Is a Powerful Thing: Twenty Years of Teaching Creative Writing at Douglas County Jail (Kansas UP, 2021).