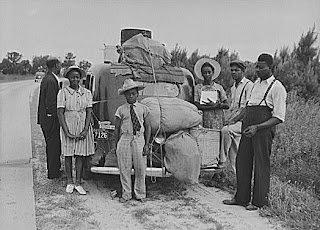 Utilizing a database of 100 novels reveals useful ways of considering the central topic of migration in African American literature. Mapping novel settings and the movements of protagonists across different geographic locations provides general readers and scholars important opportunities to consider how migration has emerged in the literary imagination of black novelists.

The Great Migration’s movements of two million African Americans from southern states to the Midwestern, Western, and Northeastern regions of the country during the early twentieth century are reflected in African American novels, particularly among black male protagonists. James Weldon Johnson’s The Autobiography of an Ex-Colored Man (1912), Langston Hughes Not Without Laughter (1930), Ralph Ellison’s Invisible Man (1952), and James Baldwin’s Go Tell It on the Mountain (1953) all feature men making migrations to the Northern cities, specifically New York City or Chicago. New York and Chicago stand out as popular destinations for black people during the Great Migration, and have remained as recurring settings for black novelists.

More than 54 of the 100 novels in our database are set in urban areas or have major scenes taking place in cities. New York City and Chicago are the settings or sites of scenes in more than 27 novels in our database. At least one novel, Colson Whitehead’s The Intuitionist (1999), never identifies New York City by name as its setting, but the fictional metropolis featured in Whitehead’s narrative is definitely based on the Big Apple.

The recurring focus on Chicago and New York City in novels suggests the importance of those cities in the literary imagination of black America. Moreover, the prevalence of urban areas as settings for novels indicates that writers view city environments as fertile grounds for positioning their narratives.