Martin Luther King Jr. Day is always celebrated on the third Monday in January across the United States to recognize his birthday, which is on Jan. 15. After King’s assassination in 1968, a public campaign by social activists, government officials and musicians (Stevie Wonder’s “Happy Birthday” was used to popularize the campaign) began to urge the government to make King’s birthday a federal holiday. President Ronald Reagan signed the holiday into law in 1983, and it was officially observed in 1986. Although some states were reluctant to observe the holiday, MLK Day was officially celebrated in all 50 states in 2000.

To remember the work of Dr. King on MLK Day, here are some things you can do:

To kick off MLK day listen to his iconic  “I Have A Dream” speech.  On August 28, 1963, Dr. King spoke from the Lincoln Memorial to a crowd of 250,000 people at the March on Washington for Jobs and Freedom. In his speech, King called for an end to injustice and inequality in the United States. King’s speech incorporated themes from the Bible, the Declaration of Independence, and the Constitution. King also paid homage to the Emancipation Proclamation, which the march coincided with its centennial anniversary.

Originally, King’s speech was supposed to last only four minutes but ended up being 16-minutes long.  The phrase “I have a dream” was not incorporated into  King’s pre-written speech.  However, King started to speak about his dreams after gospel singer Mahalia Jackson shouted “Tell them about the dream, Martin. Tell them about the dream.”     King’s ” I Have a Dream” speech encapsulated the struggle of racial justice Blacks faced in the U.S. while remaining hopeful that change will come.

2.) Read Ta-nehisi Coates article on how Civil Rights Protests have never been popular 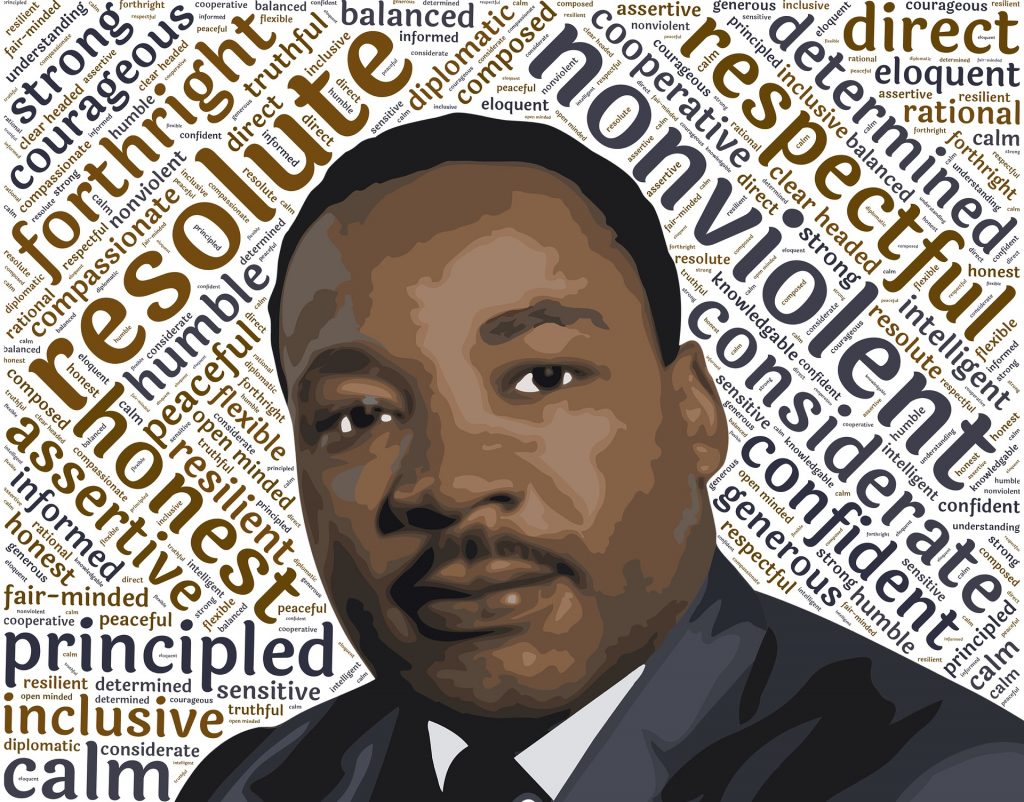 Writer Ta-nehisi Coates wrote a column in the Atlantic critiquing nonviolent protests in modern-day America. Coates article is a response to David Leonhardt ’s column in the New York Times. Leonhardt attempts to draws comparisons between Colin Kaepernick ‘s use of kneeling as a form of protest to the civil rights marches during the 60s.   Leonhardt’s premise is that athletes use of kneeling to protest racial injustice is not effective because of its lack of popularity.

This Ava Duvernay-directed film is not necessarily a biopic of Dr. King. Instead, the film is based on the 1965 voting rights marches from Selma to Montgomery, Alabama, which were influenced by Dr. King’s unwavering guidance. The film brilliantly captures the pain, resistance, and resilience that encompassed Dr. King’s leadership during the marches, and it offers a vivid glance into the many nuances of how his leadership is defined and should be remembered.

The film features a stellar cast, including David Oyelowo (who portrayed Dr. King), Oprah Winfrey and Common. The film’s lead song “Glory”, which was performed and written by John Legend and Common, won Best Original Song at the 2015 Academy Awards.  Their performance of the song during the ceremony is also a must-watch.

4.) Watch NBC Dateline  Special ‘Hope and Fury’: MLK, The Movement, and The Media

In 2013, to commemorate Dr. King’s 50th anniversary of his assassination NBC aired “Hope and Fury: MLK, The Movement, and The Media,” which was produced and directed by Rachel Dretzin and Phil Bertelsen. The documentary takes a look at the civil rights movement in the 60s and draws parallels to present-day activists and movements like the Black Lives Matter Movement. The film analyzes activists of today use of social media and the strategies Dr. King and other well-known civil rights leaders used.

The documentary uses first-hand personal collections,  archival footage, and photographs to showcase the trials and tribulations of the civil rights movement. The documentary is a must watch for anyone who wants to develop a nuanced understanding of how social-political movements function and their impact on society.