In 1985-1986, I had the great fortune of winning an NEH Fellowship for Individual Study and Research.  At the time, I was teaching at the University of Kentucky, with Zora Neale Hurston scholar Bob Hemenway, Callaloo editor Charles Rowell, and the ineffable scholar-teacher Sandra Y. Govan.  It was an uplifting, timely gift, rescuing me from several life changes that had morphed into life challenges.  The purpose of the fellowship was to research and write a study on a now arcane idea about Sterling A. Brown—his professed belief in critical realism.  With encouragement, I applied for a position at Yale as a Research Fellow. The eminent scholar Robert Stepto agreed to be my faculty sponsor. Armed with my NEH, I took off for New Haven for what would prove to be a series of magnificent experiences.

One of them occurred on a Saturday afternoon when a special program on storytelling took place.  You must remember that Topeka, Kansas; Omaha, Neb.; and even Minneapolis, MN—all places where I’d earned degrees—had not prepared this Midwesterner for the prestige and historical significance of an Ivy League school.  Wide-eyed with wonder, I came to understand what made Yale and the other institutions elite. Speakers, artists, concerts, and much more, featuring the names of individuals whose works defined the fields we studied, routinely appeared at Yale.  On this afternoon, the program consisted of Toni Morrison and August Wilson, moderated by Robert Stepto.

As I walked up to the Yale Repertory Theatre, where the program was to take place, a long, stretch limousine pulled up and parked at the curb.  I remembered hearing stories about Toni Morrison and her insistence on going first class. And, lo, who gets out but Toni Morrison!! I followed her into the theatre and found a decent seat to enjoy what promised to be an extraordinary dialogue.  As moderator, Robert Stepto did his job effectively and efficiently. He welcomed everyone, gave the barest of introduction to two people who needed none, and then yielded the lectern to Toni Morrison. Thirty years later, I cannot recall the specifics of her remarks.  I was still fighting the effects of being mesmerized by THE star in the firmament of African American fiction, and, frankly, by being at Yale too. But I do recall how insightful, poignant, and brilliant she was that day. She delved into the traditions of American and African American narratives, perhaps warming up to Playing in the Dark.  Some of the details of August Wilson’s presentation, however, were permanently etched into my memory.

August Wilson eschewed the traditional “academic” talk and proceeded to tell us a long, winding, absorbing story.  He recounted growing up in Pittsburgh, PA, struggling with high school, and seeking to find his own education in books that interested him.  One bookstore was very crucial in his learning process because the owners often purchased remaindered books and sold them cheaply. When the front covers of the paperbacks were torn off, that meant the books could be purchased for a dime.  He found one such book and, after buying it, read it voraciously in one sitting. It was so fascinating that he went back and bought five more copies and handed them out to his friends. They read it and engaged in deep discussions about character, plot, and narrative development.  By this time, we in the audience, who had hung on his every word, had our curiosity piqued by one nagging question: what book could be so arresting that his cohort of nontraditional learners found themselves captured by its richness? Finally, when we were nearly squirming in our seats with anticipation about the book’s title, he mercifully released us from the entangled web of the story he told.  He recited, verbatim: “Here is the house. It is green and white. It has a red door. It is very pretty. Here is the family. . . .” Yes, he quoted the first two pages of The Bluest Eye.  And everyone, even Toni Morrison, went wild!!

Part remarks on the nature of Black storytelling, part homage to Toni Morrison, and part artistic performance—August Wilson was simply exquisite that day.  With Toni Morrison’s passing, efforts to define her influence, her extraordinary talent, and her essence will take place. No tribute, however, will be greater than the one August Wilson paid that day. 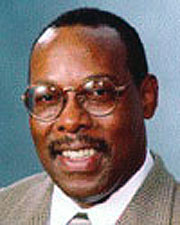 Dr. John Edgar Tidwell is a Professor Emeritus from the University of Kansas’ Department of English