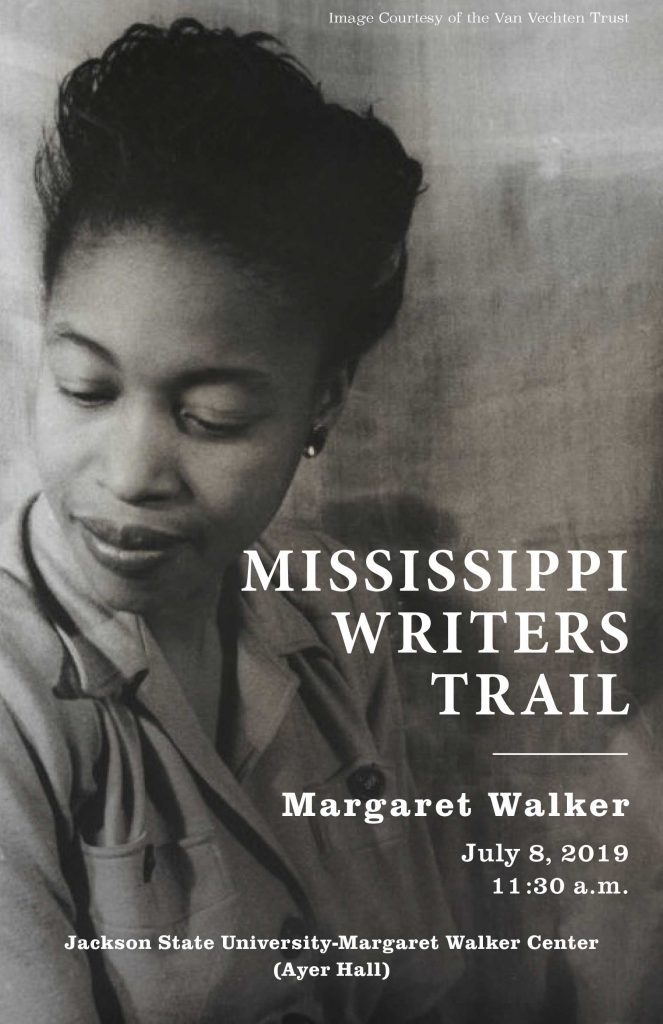 Margaret Walker (1915-1998) would have turned 104 this past July 7, 2019.  The poet, novelist, educator and cultural critic was part of a distinct tradition of writing that is too easily forgotten.  A tradition of truth-telling that makes us see and understand ourselves and our relationship to others differently. Walker’s history may not be as well known to some, but she was a “national treasure,” as former Chair of the National Endowment for the Humanities, William R. Ferris, once told an audience.  For those who did know her also knew that Walker loved a party, celebrations were her forte, and she didn’t wait for others to organize them.  Known for her elaborate backyard cookouts, her exquisite culinary skills, especially her New Orleans gumbo, and black-tie events, Walker brought her celebrity friends and politicians to meet ordinary folk in Jackson, Mississippi, the place she called home for five decades.

The notoriety that had become Mississippi’s mantra, Margaret Walker turned on its head, showing us a different Mississippi and the beginning of a newly awakened America. Most know her for “For My People,” first published in 1937 and the title poem of her 1942 award-winning collection; it is one of the most anthologized poems of all times.  According to poet and educator C. Liegh McInnis, her literary manifesto appeared much earlier. As a college student, she met W. E. B. DuBois, then editor of The Crisis. He published her poem “I Want to Write” in a 1934 issue. 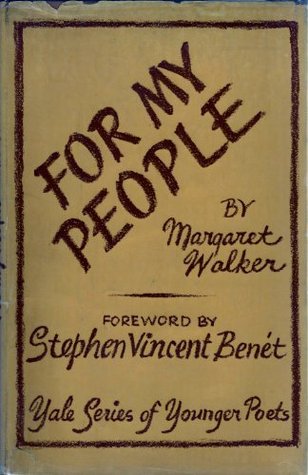 Since her passing in 1998, the Margaret Walker Center has held an annual birthday celebration for Walker, but this year’s celebration was different.  Not only did it come one day after her birthday, but it was the state of Mississippi who threw the party. Gathered on the lawn in front of the historic Ayer Hall at Jackson State University, friends and admirers watched the unveiling of the newest marker on the Mississippi Writers Trail.  True to form, the occasion attracted young students who came to pay tribute, symbolizing the thousands who had passed through the doors of Jackson State University and felt Walker’s impact during her lengthy teaching career there. 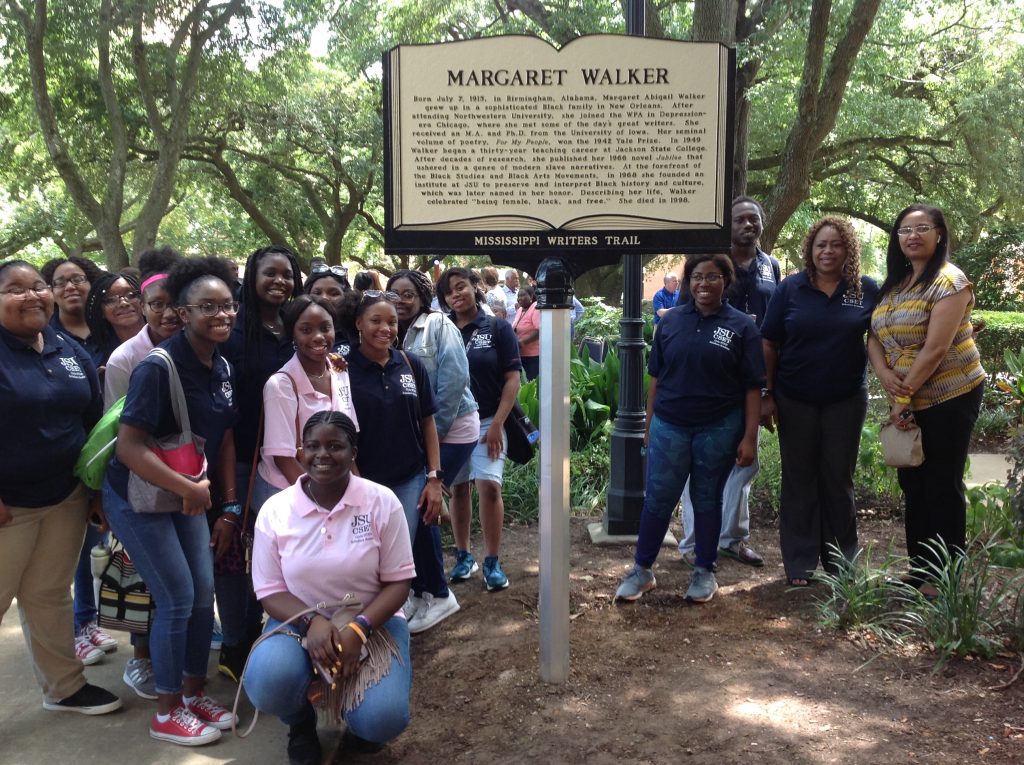 Walker was born and spent her early childhood in Birmingham, Alabama but grew up in New Orleans. Both experiences gave her an intimate knowledge of the South. If she found her voice in Chicago after completing college and beginning her professional writing career, she found a home for life in Mississippi, the place where her writing came full circle.  Her seven published books include Jubilee (1966), the long-awaited family chronicle based upon her grandmother’s stories about slavery, three poetry volumes, a biography of Richard Wright, another famous Mississippian, and two collections of her essays.

Walker owed her political and social awareness to the hopeful New Deal era, where she joined artists and intellectuals writing, working, and embracing radical left ideas.

By the time she arrived in Mississippi in 1949 in the post-World War II years, there were already rumblings of a new kind of war on American soil. That war was the Civil Rights Movement, and she became both witness and interpreter for Mississippi and the nation through her prose and poetry. Her vision was broad; her words filled with the prophetic lyricism that had become her signature.

Her keen critical observations during the Nixon-Reagan-Bush years led her to believe that the country was moving toward fascism.  Her predictions were rarely wrong, and one wonders what she might have said had she lived to see Donald Trump’s America.

Walker was a self-assured southern woman of her time, an artist with unusual gifts, deeply spiritual, and a most successful institution-builder.  She maintained her right to challenge any presumed authority, especially when she was right. Mississippi was her ground zero, the phoenix rising from the ashes, and she believed all things were possible in the blackbelt turned sunbelt.  Black Mississippians and white Mississippians, the Mississippi Choctaw, and the Mississippi Chinese were entangled in ways that allowed for new and unusual possibilities. With the world looking over her shoulder too often wondering who she was and how she came to be, Walker knew that Mississippi, as the first political base for Black people in the 20th century, could and did give real meaning to the phrase “Black Power.” Its spiritual wealth and its traumatic history provided an endless source of cultural and literary creativity. Being released from the stranglehold of segregation would allow Mississippi to build on the memory of its martyred dead: Emmet Till, Fannie Lou Hamer, Medgar Evers, James Chaney, Andrew Goodman, Michael Schwerner, and those much too under-discussed students who were part of the Jackson state massacre. 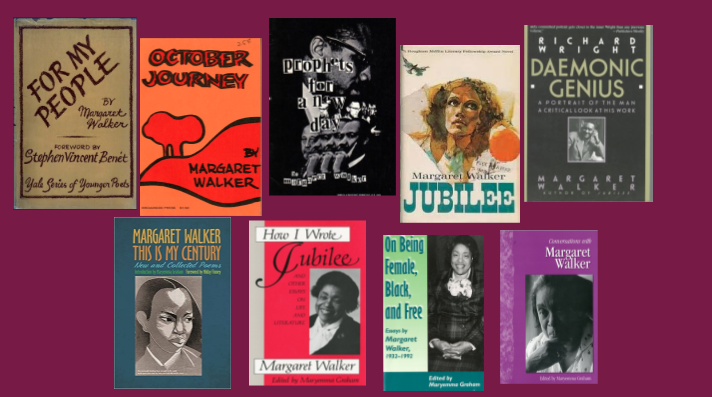 Walker prophesied that the social dynamics, geographical location, and climate in Mississippi would become increasingly identified with the Global South. The idea was one of those that led her to found the Center for the Study of the History, Life and Culture of Black People in 1968 [now the Margaret Walker Center].

The dedicated space brought national and international leaders and ordinary people together for intense discussions and debates about the changing world order. Walker paid even closer attention to and nurtured writers, especially a younger generation of Black women.  In 1973 she convened the Phillis Wheatley Festival, a commemorative gathering of Black women, and today considered the foundational moment for the Black Women’s Literary Renaissance.  She was among the first to bring attention to the concept of Magic Realism outside of a Latin American context.

Mississippi has three trails: one for Blues, one for Civil Rights, and now, one for its writers.  It means that the state fully acknowledges its larger legacy, especially those women whose literary art was Mississippi made.  Most know Mississippi as Faulkner country, but his displacement here is telling. Eudora Welty received the first marker on the Mississippi Writers Trail; Walker is now the second. Born into the same generation, Welty and Walker saw and lived in different worlds, but theirs was a “sister-act” says Carolyn Brown. They were bound together by time, place, and condition.

From 1949 to her death in 1998, a month shy of 50 years, Walker brought Mississippi out of the shadows into the light, as an advocate for its people. No one could have been more confident in its future. She wrote through and with a profound sense of lived history, knowing that her witnessing had the limitations of time.  On July 8, 2019, Mississippi made certain that we will not forget that voice or the woman behind it, the woman who believed in Mississippi perhaps more than it believed in itself. 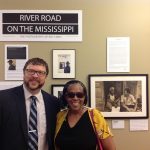