Jean Toomer’s Cane is a beautiful modernist text that captures the binaries that are most easily associated with Black literary lives of the early 20th century: The North versus the South and the rural laid against the urban.  In its entirety, the work follows the trail of the Great Migration, starting South, heading North, and concluding in a liminal space that is in simultaneously neither and both location. The first section of the book focuses upon the trappings that situate the Southern landscape as a site of horror and oppression.  The poem “Portrait in Georgia” calls up the spectre of lynching, and places it in conversation with images of inter and intra racial social violence, present in Blood-Burning Moon, Karintha and Becky.  The Southern landscape is not entirely demonized; the poems “Song of the South” and “November Cotton Flower” hold glimpses of beauty.

The first section of this work has an interesting focus on both Black aesthetic beauty and the deconstruction of the Black body.  Concerning beauty, Toomer presents an image of culturally normative beauty in his opening work, Karintha.  The entire piece serves as a tragic homage to her beauty and her youth and innocence stripped to carelessly from her, but her beauty is constructed around the images of “skin like the dusk” and the ways of the folk.  Carma, who is presented within her self titled short story, is presented as strong and capable as well as beautiful.   Sadly, however, the strengths of these women were presented as vehicles that lead to their individual tragedies.  The destructive power of feminine strength is tied within the concepts of deconstruction of the body within this section.  The image of smoldering sawdust serves as a continual backdrop to the multiple bodies this section presents that are burned, broken, and dismembered in a physical or metaphoric sense. 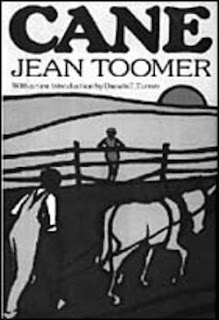 The second section of Toomer’s work examines the city, and presents the image as gritty, a potentially degrading influence, and a site for both creation and destruction.  The opening work of this section Seventh Street invokes the images of speed, movement, and restless migration.  A sensuality of musicality rides along the prose of this section, most evident in the opening poem in Seventh Street and “Her Lips are Copper Wire”.  Both Bona and Paul and Box Seat present the problematic nature of social control, racialized representations of love, and the isolating nature of the urban.
The third section of the work calls to DuBois through the bars of the prose, marking the Black literary imagination upon the image of the isolated educator within a liminal landscape and the situation of being uprooted from home and the land on which one is born.
Toomer’s Cane is nothing but a work of beauty.  It situates the location based binaries of the cultural and national landscape within the complexity of Black life, love and sorrow.  It is nothing short of breathtaking.