In Part II DeAsia Paige and Shawna Shipley-Gates hold a conversation on the impact Black feminism has had on each of their lives and its continued use their everyday experiences. Paige also discusses her current work and plans for the future.

*This conversation has been edited for length and clarity*

Shipley-Gates: I’m glad you brought up feminism because I found it very interesting. I personally have a background in sexual health, so my focus is on pleasure and sexual health among Black women. I appreciated you saying that Black feminist scholars are the ones that gave you your first real sex education class. How important was it to demonstrate your commitment to Black feminist scholarship in the book?

Paige: It was a main priority for me because the book had some feminist undertones, and that’s who I am in general.  I knew that had to be in the book. If it wasn’t throughout the book, it had to be a small piece of it. You can’t really know me and understand my experiences and how I’m interpreting them, unless you know that most of my education, what I know today, and how I go through things in my life are because of reading bell hooks, Brittany Cooper and the like. So that was the priority for me.

Shipley-Gates: I think that was another piece too, you brought that academic aspect to the book, still making it accessible. Very Brittany Cooper-ish, right? She’s a community engaged scholar, where you were like, “I still want to introduce you all to Black feminism, if you haven’t heard of it before, and how I use it. That it’s accessible, and part of our everyday life, such as providing my first sexual education class.” I love talking about pleasure politics; my first introduction was Joan Morgan’s When Chickenheads Come Home to Roost. When you read these pieces, it resonates with your day to day life, which I saw in your book. Sometimes I think people are afraid to integrate academia with mainstream writing or work, period. So kudos to you for explaining it in a way that people can flow right with you.

You mentioned that you have an impactful relationship with music? I thought that was brilliant, that following Black musical artists provided the anthems or soundtracks for this particular time of my life. At what point in your life did you realize that you had such an impactful relationship with music? When did you realize that’s what helps you get through?

Paige: I have a church background and to me the best part of church is the praise and worship section. I grew up singing in the choir as well, so music has always been a way to feel something. In church music is used as a conduit to catch the Holy Ghost, as prayer breaks, they are a popular phenomenon within Black churches. For me, music has always been that way of connecting with some sort of power, feeling, or really anything, and that was really instilled in me from a young age. I went to a Christian school and the Christian church that I went to was affiliated with the Christian school. My mom was in church as well, so our church is in my DNA. I think that’s when I knew. It was always inside of me. As I grew up, I became more interested in secular music, because in the history of music in this country, secular music is derived from gospel music. It wasn’t like I had to shift gears when making that transition to listen to secular music. It was the same thing for me, just in a different format, a different language. But it’s always been in me, since before I can even remember really.

Shipley-Gates: That’s interesting because you said you relied on gospel music quite a bit.  Even when you were grappling with your relationship with church at the time, if nothing else, you can go back to gospel music. I sensed that could have been where it started, but I love to confirm that.

What do you have going on now, since you’ve graduated, since the book is out? What have you been working on? 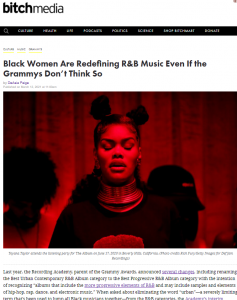 Paige: Right now my job keeps me pretty busy. I am currently based in St. Louis where I write for the Belleville News Democrat. I cover Black communities in the Metro-East region. What I do is in partnership with Report for America, a national fellowship program for entry level journalists that connects them to newsrooms across the country. I received one of the fellowships and got placed there. Most of my time is dedicated to covering race issues and social issues in the Metro-East. I’m currently working on a story about how Black women and urban farmers are working together to provide food for their communities. It’s a lot of pressure because I am the only Black reporter in my newsroom, so there’s always this pressure of not only doing your job, right, but also trying to make sure that you’re covering your community in a way that they will really enjoy. That basically takes up all my time.

I do freelance music journalism, but I haven’t done that consistently because my job takes up a lot of my time. I did write this piece for Bitch Media about how Black women R&B artists are overlooked in this year’s Grammys. I like to write about the intersection of race, music, and culture. That’s something that I try to do on the side, but my main job takes all that away from me sometimes. I’m trying to get back into it because I really love writing about music.

Shipley-Gates: It’s funny that you mention Bitch Media.  I’ve actually realized since the holiday break, that I really enjoy writing myself. I just realized I like to write about culture and other things focused on pleasure. I just did a Bitch Media article a couple months ago on Heaux Tales by Jazmine Sullivan.

Paige: Oh, I think I might have read that because I was looking at you now, like, I’ve seen her before.

Shipley-Gates: Yeah that was me! My first one, so I was like, I think I like this. It was my inner Brittany Cooper trying to straddle the line between academia and the mainstream. I enjoyed writing and you’re right, it takes a lot out of us to try to commit to what pays the bills and trying to do what we love to do. I’ve had to commit to that but if not, I have my own blog. Blogging and writing these articles are a perfect way to present work like your book in a way that’s more visible and accessible.

Paige: Yeah, what a great project to write about.

Shipley-Gates: Heaux Tales is a perfect example too, of Sullivan being able to share what she’s gone through, but in the musical form. She’s able to say something that people are grappling with – like what’s a good girl? You know, I definitely go there because when it comes to books like yours or articles that we love to write, or just musical artists, people like to be hypocritical, without realizing that there’s a lot that we have in common. However, somebody has got to let you know what we have in common, especially Black women. Don’t be too much on your high horse, she’s saying; you got hoe tales just like anybody else.

It’s good to see that you’re still pushing and that’s awesome. Are you on Instagram, Twitter, where can readers find you?

Shipley-Gates: I know you haven’t really done that much marketing, but we still want to pump you up, especially with the Bitch Media article out, we want to be able to push that as well.

So do you have any thoughts of future projects? Are you thinking of another book? Or are you going a different route? I know, you said that your work is sucking up a lot of your time. But your ideal situation: if there was another 20 hours in a day, what would your future projects look like?

Paige: I’ll definitely be doing more music journalism, for sure. As far as another book, I wrote this book through a program affiliated with Georgetown University that helps you write a book in a year. The process was very rushed, but then there was also the pandemic. I was trying to graduate and move to St. Louis all while finishing the book. I With a lot of things going on, that made the writing process a little bit less enjoyable for me. Now, if I were to do another book I would go at my own pace. Do what I want whenever I want to do it, not a set timeframe, which was just impossible, I don’t know how I did that with everything that was going on, but yeah, I would love to write another book maybe in five years.

Shipley-Gates: Right, you need more material, you need more to report on, but in the meantime, you’re working on musical journalism. Now we can try to see future projects. One last question, what would you say to all of your readers, especially the ones who are, were, or might end up dealing with traumatic experiences, similar to what you experienced in college?

Paige: I would say don’t think that you’re doing too much or that you’re being overdramatic. Don’t beat yourself up too harshly. Just be gentle with yourself and know that your feelings are valid, even when you think that they aren’t. I’m an overthinker, so when you have that compounded with the patriarchy and how men can act, you start to think that maybe I am doing too much. You become overly apologetic for whatever you did, but that’s the patriarchy at work for sure. I want readers to know that they are never alone, never be afraid to advocate for yourself because you’re definitely worth it. For sure.

Shipley-Gates: That was brilliantly said. Any last thoughts or comments that you would love your readers to know about your book that I didn’t ask about?

Paige: This is so crazy. I’m always the one doing the interview and that’s the question I ask people at the end.  I’ve never been asked that question before. But no, I think you’ve covered it. I’m glad that you were interested in doing this, I really appreciate it. The Project on the History of Black Writing connected us for sure, and I’m excited to see how it turns out.

Shipley-Gates: Thank you so much again for being willing to meet with me. Amazing job. I’m proud of you and let’s push this book out, because I think a lot of people need this.

DeAsia’s book can be found here and you can also find part one of the interview here.

Shawna Shipley-Gates is a graduate student in Women, Gender, and Sexuality Studies at the University of Kansas. Her research interest highlights the cultural literacy of black women’s sexual health and how those cultural experiences can be translated into effective yet sex-positive education; healthcare and wellness practices; and policy and advocacy work. She is also the owner of Cupcake Noire, a sex-positive brand for black cis, trans and non-binary womxn.