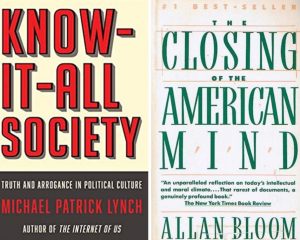 We live in paradox.  It is a “truth,” universally recognized and universally denied in contemporary American society, that democracy is dying.  Recognition that this “truth” is not a “false-truth” can be enhanced by reading Lynch’s book in tandem with Allan Bloom’s The Closing of the American Mind: How Higher Education Has Failed Democracy and Impoverished the Souls of Today’s Students ( New York: Simon and Schuster, 1987) in order to behold what prism refracts conservative and liberal ideologies simultaneously.  The prism is digital technology, the powerful impact of the Internet and commerce with social media. It is necessary for some thinkers, or at least thinkers who have the luxury to be philosophical,  to compare Bloom’s conclusion with Lynch’s and to recover memory. Recovery is necessary but not sufficient, unless the gesture is transformed from enthralling theory into pragmatic actions.

“This very reason [you can’t speak truth to power if power speaks truth by definition] is why it is crucial to slow down the spread of tribal arrogance —especially among those of us convinced we wear the armor of righteousness.”

Bloom:  “This is the American moment in world history, the one for which we shall forever be judged.  Just as in politics, the responsibility for the fate of freedom in the world has devolved upon our regime, so the fate of philosophy in the world has devolved upon our universities, and the two are related as they have never been before.  The gravity of our given task is great, and it is very much in doubt how the future will judge our stewardship” (382).

Lynch:  “This very reason [you can’t speak truth to power if power speaks truth by definition] is why it is crucial to slow down the spread of tribal arrogance —especially among those of us convinced we wear the armor of righteousness. It is also why we should not give up on truth and humility, and why neither information pollution nor polarization should make us abandon them.  When we own what we don’t know and remain open to what others do, we exemplify a basic respect for our fellow citizens that is demanded by democracy. We may never completely  realize the ideal of respect —the ideal of living in a society that treats people equally, that achieves social justice, that values truth and reasons, and that rejects arrogance and dogmatism.  But these are goals worth striving for, and it would be perverse to give up on them just when they are under threat.  It is precisely then that democratic ideals matter most” (170).

Bloom’s arrogance was imperial and tinged with what is currently identified as the American dream of white superiority, and the neo-fascist contours of the dream may be alarming.  Lynch, who is not immune to the arrogance of righteousness, is at once nuanced and condemned by a holding fast to the optimism from which Bloom distanced himself. He is subject to the consolation of philosophy in a nation where a large number citizens think philosophy is a cuspidor of fake nonsense.  Arrogance wears many ignorant guises.

Should we want to up the ante by way of conclusions, we might ponder how Marilynne Robinson ends her essay “Which Way to the City on a Hill?,” published in New York Review of Books, July 18, 2019: 43-46, an essay occupying a middle ground between Lynch and Bloom.

“Those who control the word “American” control the sense of the possible. Our public is far more liberal than our politics. Our politics must change if there is to be any future for representative democracy.”

Robinson:  “We know our penal system is unfair and inhumane, that our treatment of immigrants threatens the ideal of a just nation.  Why are we paralyzed in the face of these issues of freedom and humanity? Why are we alienated from a history that could help us find a deep root in liberality and shared and mutual happiness?  Those who control the word “American” control the sense of the possible. Our public is far more liberal than our politics. Our politics must change if there is to be any future for representative democracy” (46).

Robinson is ironic, in a fashion that Bloom and Lynch are not,  as she invokes a history authorized and even in 2019 authored by what Charles Mills aptly named the racial contract, by what Lynch urges us to admit is implacable enslavement to overvaluing what pretends to be knowledge, what in actually is an ocean of ideas governed by algorithms.  Perhaps Lynch dealt in greater detail with artificial intelligence and the panoptical his earlier book The Internet of Us: Knowing More and Understanding Less in the Age of Big Data (2017), because a more trenchant analysis is needed than his merely noting that algorithms are use to curate online and offline lives (29).  The gravity of having such analysis can be appreciated by dwelling on the dialectic between individual and group decision-making, one topic that Jared Diamond  explored among many others in Collapse: How Societies Choose to Fail or Succeed (2005).  Navigating among the ideas of Bloom, Mills, Robinson, Diamond, and Lynch is an excruciating journey.  It is, nevertheless, essential for reckoning with a family of militant and tragic insanities which seek to hold all Americans hostage in the Age of Trump.  It can be argued to some degree that many Americans follow their leader just as the eponymous character in Melville’s Benito Cereno followed his into a virtually terminal illness. In other words, many Americans are playing dangerous games of political suicide as they condone aspects  of violence that can boomerang.

“We shall never know it all. We are not equipped to be omniscient. But as our nation drifts slowly into its fated ending, what we are equipped to know is how reprehensible, abject stupidity can hasten passage into concentration camps and early graves.”

Know-It-All Society is a timely warning that the  power of long-term exposure to the  digital may be irreversibly altering how our brains function and how we make choices of all kinds.   We can be reasonably certain that such power is more than a bio-cultural accident. It quickens desire to know how effectively cognitive science might help us to comprehend  the primary reasons for the dying of American democracy . As many of my ancestors would put it, democracy is in low cotton. It would be foolhardy to believe the audacity of hope and the arrogance of optimism will create an escape from barbarism or willful forms of domestic and foreign terrorism or  provide any relief from our endless, existential struggles against the cosmic Siamese twins named totalitarianism and capitalism. We shall never know it all. We are not equipped to be omniscient. But as our nation drifts slowly into its fated ending, what we are equipped to know is how reprehensible, abject stupidity can hasten passage into concentration camps and early graves. 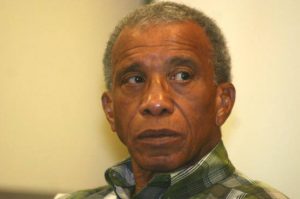