When Zora Neale Hurston published Their Eyes Were Watching God in 1937, she had no idea of the currency it would continue to hold long after her death. The African American writer and anthropologist rose from humble beginnings in the South to become one of the leading figures of the Harlem Renaissance. A prolific writer, Hurston published more than 50 short stories and four novels during her lifetime. Their Eyes Were Watching God would become her most popular work.

The book remains a classic work of the Harlem Renaissance. It is an exemplary model of the dynamic, rich nature of black dialect and a staple in black feminist studies. In writing the novel, however, Hurston simply told an affirming story of a young woman’s growing self-autonomy, sensuality, and love.

It was a love story, no doubt a troubled one of mis-love, that existed among, between, and for black people on terms defined and judged only by themselves. The novel not only explores the sentiment between its heroine and the flawed men in her life, but also explores the intimacy she finds with her sister-friend as well as the distinct folk culture that sustains the segregated black community. In this way, it’s all about love.

You can finish reading over at Black Perspectives 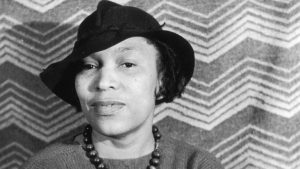