The following is the first installment of a three-part series recapping the events of The Project on the History of Black Writing’s NEH Summer Institute “Hurston on the Horizon: Past, Present, and Future”.

Zora Neale Hurston’s literary and anthropological influence remains constantly relevant in today’s scholarship, and it continues to invite multiple audiences into the depths of her mysteries. The Project on the History of Black Writing (HBW) in collaboration with the Association for the Preservation of the Eatonville Community (P.E.C.) held the virtual National Endowment for the Humanities Institute “Hurston on the Horizon: Past, Present, and Future” July 11-30, 2021. For three weeks, twenty-five Summer Scholars took a deep, expansive dive into Hurston’s popular and lesser-known works. While the novel Their Eyes Were Watching God has long had widespread popularity within the African American literary canon, Hurston wrote at least seven short stories, four novels, an ethnography, and ten plays that remained unpublished during her lifetime yet existed among additional materials archived in the Library of Congress. Hurston’s boundary crossing engagement with various publics, language, new technologies, gender, race, culture, and the South became a blueprint for intersectionality as she appealed to educated society and “the folk” alike. Through synchronous and asynchronous meetings, the Institute connected Hurston’s critical approaches to today’s conversations in the humanities by asking 3 major questions: (1) What are the evolving and developing patterns in Hurston studies? (2) How can new technologies innovate pedagogies and enhance our understanding of Hurston’s canon? (3) Where does Hurston’s legacy fit into larger discussions about rethinking the past, present, and future meaning of African American literature and culture studies? By exploring answers to these questions, the Institute inspired participants, faculty, and staff to expand their reach into Hurston studies. 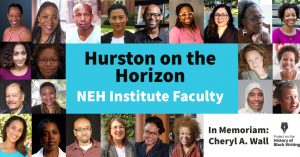 The first week of the Institute was titled “Hurston’s Canon,” where the focus included the Harlem Renaissance, Eatonville, and emerging digital methodologies. We opened with a tribute to Dr. Cheryl Wall who was originally scheduled to be a member of the Institute faculty before her passing in 2020. Her spirit and scholarship remained with us throughout our conversations; Wall’s chapter “On Art and Such: Debating Aesthetics during the Harlem Renaissance” from her book On Freedom and the Will to Adorn: The Art of the African American Essay added rich discussions to our interdisciplinary focus on Hurston’s texts. Dr. Deborah McDowell referenced Dr. Wall’s work when explaining how one should read Hurston. “Hurston is invested in keeping things shaken up,” Dr. McDowell pointed out. “As Cheryl Wall mentions, one should read Hurston against the grain…we read Hurston’s lines along with other lines in the interests of complexity.” 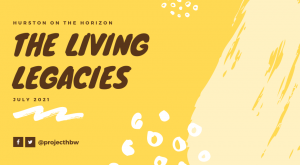 Thinking of Hurston’s intersectionality and complex engagement with multiple audiences, Summer Scholars and participating faculty discussed ways in which her work could be more accessible today. Dr. Carmaletta Williams, the executive director of the Black Archives of Mid-America and appointed a daughter of Hurston, suggested that the latter’s “archives have to be accessible. We have to make it that people want to read [them]; public scholarship is one of the ways that we do that. We don’t just make scholarly tombs; we have to make them accessible— that’s actually the focus of my writings.” In addition to Williams, N.Y. Nathiri, John Wharton Lowe, and Maryemma Graham were featured in “The Living Legacies” public panel, which focused on cultural preservation, oral histories, archival access, and literary recovery. Dr. Graham discussed how Hurston’s works are constantly being reimagined through the people who knew her. For example, Dr. Graham told stories about her own aunt’s interaction with Hurston and about American poet and writer Margaret Walker including Hurston in her journals. Dr. Lowe, a literary historian and professor of English at the University of Georgia, drew on his text Jump at the Sun: Zora Neale Hurston’s Cosmic Comedy to highlight his working history with Hurston’s influence on the African American humor genre.

Throughout the week, the faculty homed in on Hurston’s childhood town, Eatonville, Florida, while also highlighting Hurston’s birthplace in Notasulga, Alabama and her move to Harlem, New York, where she took part in the Harlem Renaissance. “Hurston and Eatonville are two sides of the same hand,” stated Dr. N.Y. Nathiri, the executive director of P.E.C., “She’s an environmental activist.” Dr. Nathiri heads the ZORA! Festival of the Arts and Humanities, which aims to make Eatonville an internationally recognized cultural tourism destination through Hurston’s legacy. Dr. Williams reiterated Dr. Nathiri’s point about Eatonville as an active influence on Hurston’s identity and scholarship: “Hurston [goes] back to Florida, to home where the land will feed [her], and it’s the place where she can decompress. So, nature is also the space where she can work herself out.”

At the end of the week, Dr. Julian Chambliss saw Eatonville as representing “the Black speculative epistemology…crucial to understanding Hurston’s importance to our current moment.” Chambliss situated Zora Neale Hurston’s work as both an example of the counterstorying practice project central to Afrofuturism and a model to rethink the nature of Black cultural knowledge. Along with the ways Afrofuturism employs race and technology, Summer Scholars engaged with Dr. Sylvia Fernández and HBW’s Black Book Interactive Project Manager Jade Harrison to learn about digital humanities methodology to not only preserve Hurston but situate her in the twenty-first century. 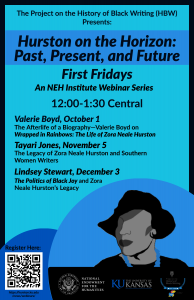 From the novel Jonah’s Gourd Vine to the autobiography Dust Tracks on a Road, the first week revisited Hurston’s classic works while also putting those works in new scholarly contexts. Although rigorous and informative, the Institute also aimed to create a community of support among the Summer Scholars. Outside of the 3 to 4 hours of synchronous meetings each weekday, participants met online for more relaxed conversations. To address Zoom fatigue, Dr. Giselle Anatol led a breathing meditation toward the end of the week to recenter participants during the sessions. Leaning into the mystery of Hurston, and encouraging our ongoing study of her boldness as well as her subtleties, Dr. Glenda Carpio, Harvard University professor, succinctly stated, “‘If you can’t be free, be a mystery.’ This wonderful phrase is very Hurston; she made herself a mystery. She didn’t want to be typecast in any way. The inspiration was to be a mystery.”  Hurston’s mysteries entice further dives into her works and invites contemporary methodologies into the complexities of her timeless influence.

To sustain the Institute’s intellectual engagement, three post-Institute events will further explore Hurston’s scholarship. Editor and journalist Valerie Boyd, New York Times best-selling author Tayari Jones, and University of Memphis philosophy professor Lindsey Stewart will discuss the Harlem Renaissance writer’s life and legacy in this webinar series, which is open to the public and begins this Friday, October 1. Please register to join us as we continue the conversation. 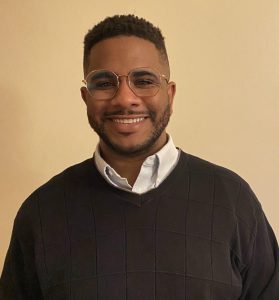