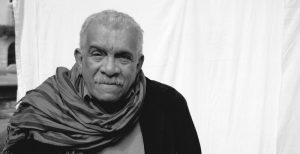 Derek Walcott’s poetry explores the African diaspora and the many ways chattel slavery impacted his identity as a young man growing up on the British, colonized, island-nation of Castries, Saint Lucia. His “A Far Cry from Africa” is one of several poems that addresses the complexities of identity. As Dr. Dance so eloquently writes, Walcott’s poetry has inspired many artists and writers across the world. Junot Diaz’s The Brief Wondrous Life of Oscar Wao opens with an excerpt from the poet’s “The Schooner’s Flight,” one of Walcott’s highly anthologized verses. In a 1995/96 article in Connotation, Mary C. Fuller writes, “This poem has come to serve as a representative or even defining moment in the corpus of Walcott’s work, articulating central preoccupations and methods. As Shabine’s self−description suggests, the poem’s protagonist claims a kind of representative status as well”. Walcott’s body of poetry— multilayered in themes concentrating on memory, ancestral history, place, and identity —won the poet a Nobel Prize in 1992.

Walcott’s writing career started at a young age, and his first poem was published at age fourteen. In the New York Times, William Grimes writes, “Mr. Walcott was always conscious of writing as a man apart, from a corner of the world whose literature was in its infancy.”

Certainly we all know that we have lost one of our greatest (and most honored) poets, dramatists, directors, painters, teachers, and thinkers. During his long career (which began when he was a child) he transformed Diasporic and world literature in ways that we have only begun to recognize and appreciate. I am grateful that I had a chance to study and teach his works, to interview him, to host him at VCU and UR, to have him as a guest in my home, and to be inspired by his example.

Shelia Bonner is an American Studies doctoral student at the University of Kansas.