“Among her many professional friends and colleagues, we consider Miriam DeCosta-Willis the godmother of Afro-Hispanic Literature and culture.  Her footprints and magnanimous contributions as a scholar-civil rights activist will forever be inspirational and trailblazing to those of us who regard her as one of Maya Angelou’s phenomenal women.” – Dr. James Davis, Associate Dean, Academic & Student Affairs & and the Humanities, Howard University 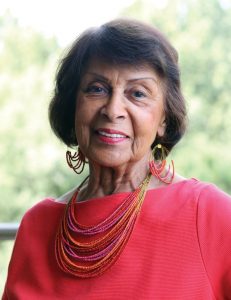 Miriam DeCosta-Willis passed away on Thursday, January 7, at the age of 86.  A consummate scholar-activist, she was a writer and a college professor known for breaking down barriers. DeCosta-Willis lived a life filled with firsts, guided by her commitment to social justice inside and outside the college classroom.

Born on Nov. 1, 1934 in Florence, Alabama, DeCosta-Willis was raised in the South by her educator parents, Beautine and Frank DeCosta. Her family, especially her mother, played an important role in her upbringing as a strong-willed fighter. From a young age, she faced the challenges of being an African American in the South, however, she faced them head-on and fought for change. From organizing student protests during her time at Wilkinson High School to attending the Montgomery Bus Boycott with her mother, DeCosta-Willis’s values were instilled early in life.

Denied admission to Memphis State (now University of Memphis), she went on to complete her undergraduate education at Wellesley College, and her PhD at John Hopkins, one of the first Black students to do so. Ironically, she returned to Memphis State to become its first Black professor in 1966, teaching Spanish, the foundation for most of her work. While there, she became a leader for Black students and staff.

Her first work, Blacks in Hispanic Literature (1977), is a groundbreaking study of literary works by writers of Latin dissent in Africa and the Americas. Daughters of the Diaspora: Afra-Hispanic Writers (2003), was also a monumental addition to the field of Afro-Hispanic studies. “…the creative writing in Daughters of the Diaspora is spring-loaded: impassioned, forthright, and fresh, but also innovative, lyrical, and sensual. While there are dangers in grouping together this diverse collection of writers, their writing (much of it poetry) explores, among other themes: masking and identity, race and sexuality, colonialism and slavery, political commitment, national identity, and class.” -Douglas Field, African American Review 2004

“Dr. Miriam DeCosta-Willis was a phenomenal scholar in the field of Afro-Hispanic Literature/Studies, especially on the works of Black Latin American female writers, many of whom did not get much publicity at the time they wrote and published in their own countries. In fact, she mentored many of us who emerged from graduate schools and began our careers during the mid- to late-1970s. It was through her that we made contacts with the above women writers, whom she interviewed in their countries and/or invited to conferences at our universities here in the United States.  Dr. DeCosta-Willis’ many books and articles brought these authors to the attention of scholars globally and helped boost their careers. From time to time, she collaborated with us on edited volumes, so I worked very closely with her. For example, Dr. DeCosta-Willis solicited articles to publish Singular Like a Bird: The Art of Nancy Morejón (1998), Afro-Cuban poet, and Daughters of the Diaspora: Afra-Hispanic Writers (2003), which broadened the scope to include writers like Shirley Campbell (Costa Rica), Cristina Rodríguez Cabral (Uruguay) and Yvonne América-Truque (Colombia/Canada), among many others. It was truly exciting to work with her.” – Dr. Dellita Martin-Ogunsola, Professor Emeritus of Spanish, Department of Foreign Languages and Literatures, University of Alabama at Birmingham.

DeCosta-Willis’s scholarly agency made another imprint in the foundational work in gender studies. Erotique Noir (1992) is a literary anthology written by Miriam DeCosta-Willis, Reginald Martin, and Roseann P. Bell, a pioneering work in the field of Black erotica. It features works from a large range of authors, poets, essayists, and scholars. Erotique Noir is described as being an intellectual, emotional, and sensual exploration of Black erotica. While celebratory, reviewers considered the book “bold, triumphant and heady, rich in its imagery, passion, and sense of adventure… [reclaiming] the fullness of Black life.”

Over the course of a 40-year career in higher education, her influence was felt by students not only at Memphis State, and Howard, but also at LeMoyne-Owen College and George Mason University.

“Dr. Miriam DeCosta Willis is one of the most important and influential scholars/criticism the history of Afro/a Hispanic literary studies. Her pioneering publications on Nancy Morejón, Luz Argentina Chiriboga, and others, are classics and remain generational scholarly models of inspiration for us all”. – Marvin A. Lewis, Professor Emeritus-Romance Languages/Literatures, University of Missouri-Columbia.

According to her former close colleague at Howard, James Davis, “We were always awestruck by her seemingly unending scholarly productivity while maintaining a ‘normal’ family life with her beloved offspring.  Not only was she a brilliant scholar and writer, but she was also an endearing mentor to so many.”

One of the fastest growing fields today is Afro-Hispanic and Afro-Latinx [Latin American] Studies, but we know only pieces of a larger origin story. Like many hidden and forgotten narratives, DeCosta Willis’s story is one of them.

“Meditations on History: The Middle Passage in the Afro-Hispanic Literary Imagination,”

Victoria Garcia Unzueta is a KU sophomore, majoring in journalism with an emphasis in strategic communications.   Originally from Dodge City, Kansas, she was editor- in-chief of her high school’s newspaper and yearbook. For Victoria, these experiences helped to shape her passion for journalism and community advancement, which led to her connection with HBW, where she is currently the social media coordinator.

HBW would like to thank Dr. James Davis, Dr. Marvin A. Lewis, and Dr. Dellita Martin-Ogunsola, colleagues of Dr. DeCosta-Willis, for their contribution to the creation of this blog.