Poet, novelist, professor, scholar, editor, mentor, musician, and boxing enthusiast, Reginald Martin became a household name early in his career, not because he played by the rules, but because he did not. Awarded tenure at 35, the youngest for anyone at the University of Memphis, Martin was among those younger scholars who elected to remain in his native South, where he could be strange and familiar, and establish a reputation for challenging conventions and initiating new ones. His study of Ishmael Reed, the dissertation that turned into book, Ishmael Reed and the New Black Aesthetic Critics (1988) remains one of the most important critical studies of the author.  Like Reed himself, Martin refused to be boxed in.

As a critic and scholar, Martin was a comfortable presence in the field of Southern literature, with a special emphasis upon William Faulkner, but he became best known for mapping the field of African literary history, criticism, and theory.  Nearly two decades ago, he served as guest editor for the special issue of College English.His introductory essay, “Current Thought in African American Literary Criticism,” a fin de siècle projection, which provided a balanced assessment of a field. Nearly twenty years later, the essay hasn’t lost its relevance in prioritizing what matters the most: enlarging our critical tool kit, avoiding prescriptive readings that either undertheorize or oversaturate with theory, placing a high value on pedagogy and teaching. The essay and subsequent ones established his reputation as one consistently challenging exclusionary practices of white and black scholars alike. Equally valuable are his reassements of major literary periods, like the Harlem (New Negro) Renaissance.  Indeed, essential reading for old and new scholars alike.

Martin’s extraordinary productivity never prevented his active relationship with a huge following of students and young scholars inside and outside the classroom. Revered for his support of young writers, he nurtured their talent and cared deeply about them, serving as editor, promoter, and at times, agent. One of those he mentored, C.Liegh McInnis, called him “transcultural and transmodern,”someone who “was always paying attention to the literary elements as to the commentary on humanity.” In a time when everyone keeps a steady count on the number of books articles, and accolades of one sort or another, Martin simply did the work.  His love of learning earned him five degrees; his passion for exposition and a uniquely creative mind resulted not only in the nine books but more than 200 articles and other publications.

Chapters of Martin’s novel, Everybody Knows What Time It Is, began appearing as early as 1987, when Martin began writing experimental fiction, blending mystery and science in futuristic settings.

As the novel evolved into publication by 2000, Martin found himself questioning the black narrative of achievement and success, and pondered the  implications for the larger black community.  To explore these questions more fuller, he set the novel in the years 2017-2020, a decision that gave him the freedom to push the boundaries of realism and to invoke what can only be called today the dilemma of postblackness.  It would be a mistake, therefore, not to see Martin’s visionary novel and diasporic sensibility as a precursor to some of today’s most vexing discourses.  Two stand out (1) afrofuturism as a literary and cultural modality, and (2) the intense debates relating to the Obama presidency and a presumptive post racial era.  Reading and teaching his work will allow us to more fully appreciate  his predictive abilities exhibited in a wide range of intellectual engagements.

Reginald Martin was a pioneer in literary practice, in every sense of the word. His interest in the  economics of publishing and various aspects of popular culture led him to found Professional Communications Services, Ltd., Inc, a firm focused on assisting authors with writing and editing, while also running the eponymous Reginald Martin Books publishing company. His interest in prison recidivism and illiteracy led to his teaching in area prisons.  Most importantly, his public mindedness and concern for cultural preservation led him to donate his massive collection of papers letters, papers, records, manuscripts, and digital media to the Memphis Public Library.

The collection is now ten years old, and its importance grows greater with each passing day. According to scholar and long-time friend, Jerry Ward, “. . . the holographs of original manuscripts that Martin has meticulously saved, collected, edited and catalogued, that, in itself, is invaluable to anyone studying African American Literature, southern culture of the last 40 years, or studying how a manuscript changes in different editorial phases.” Included in the collection are tape recordings and discs of the extensive, sustained exchanges between Reed and Martin, beginning in the early 1970s, revealing some of the pivotal moments of an entire era once they become accessible

Reginald Martin kept his own counsel. Few of us knew that he had a terminal illness. He did the work of a lifetime in his 62 years, leaving a well-preserved legacy not only in his foundational scholarship but in those he mentored.  He kept the faith. 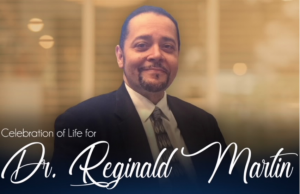 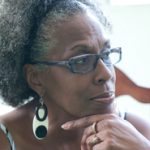 Dr. Maryemma Graham is the Founder/Director of the Project on the History of Black Writing and Distinguished Professor of English at the University of Kansas.