Mass media and social media do seem to serve the purposes of the Trump administration well. Despite its commitment to inform the public, mass media use half-truths and lies to frustrate the process of thinking in the United States of America. Its agencies profit from the enterprise.  Its agents take delight in toying with issues and ideas, providing scant evidence one might use to make judgments.  They perform scripts and entertain; they do not tax themselves to specify frames of reference.  The audience is saturated with whatever can be easily  improvised.

Social media, on the other hand, is more transparent about its artifice.  Driven by legions of passion, users eschew collective responsibility.  Responsibility, particularly the ethical variety, does not fit well with the orgasm of expression.  Subjective, highly individual reductions of the actual to the real flourish.  No explanation is needed, because all of us who use social media are secure with our tribal identities, and we blithely assume the individual is the herd. 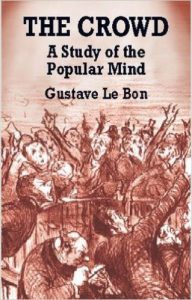 Reading Gustave LeBon’s sociological classic, The Crowd (1895), intensifies belief that both mass and social media treat ideas as “the daughters of the past and the mothers of the future, but throughout the slaves of time.”  Slaves of time?  Yes.  LeBon’s words blacken our eyes so that we might see better. A concentrated gaze exposes just how female and feminist the United States of America has become in 2017.  Yes, the trace of sexism is most visible.  The possibility energizes President Trump to deploy the tweet with maximum force, to use it as his primary instrument of termination.  And what does he desire to terminate?  Democracy as we once pragmatically understood it.  And he wills to replace democracy with new and improved fascism, the necessary and sufficient condition for making his nation great.  Mass media and social media massage us to be comfortable with the blessings of a want-to-be dictator.