The African American Read-In was founded and sponsored by the Black Caucus (a group of Black professional educators and scholars) of the National Council of Teachers of English (NCTE) in 1990. The Black Caucus voted to initiate the African American Read-In at its November 1989 meeting, but it was not until 1991 that the National Council of Teachers of English joined in the sponsorship. The International Reading Association (IRA) endorsed the Read-In some time later and over the years, other groups have come to endorse it.

In its original conception and implementation, the African American Read-In focused specifically on reading works written by Black writers on a specified date, the first Sunday in February, and at a specific time. The African Read-In highlighted the historical importance of literacy in the Black Community while recognizing Black authors. 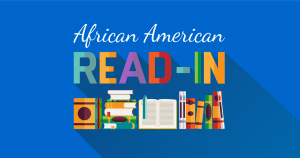 The African American Read-In was open to any individuals or groups who wanted to take part. Because of its success, how easy it was to hold and its highly educational content, schools wanted to participate and be counted. The event was then extended to two days, the first Sunday and Monday in February.

As the Read-In garnered more publicity in NCTE publications and other educational media, increased requests for information packets were received. The packets included a press release which included information on the official designated dates for the Read-In, instructions on how to be counted as a participant, specifically stating that books read had to be authored by African Americans, the report card which was to be returned, and a bookmark: “Celebrate Black History Month- February- Read a Book by a Black Author”, focused on the centrality of books written by Black writers. The bookmarks also included a tag line, “Courtesy of the Black Caucus.”

From the very beginning, the African American Read-In was successful with many individuals, churches and educational institutions participating. But, early on, it became clear to me that some school educators were not using works by African American writers and did not have knowledge of Black writers. Many were just selecting books about Black people and/or books with pictures of Black people, but not written by Black authors.

I, then, developed a list of “Selected works recommended by Black Caucus members” which was included in the packet. The list was noted as a “starter list and not intended to be all inclusive of other excellent works by African Americans.” It included many Black classics and “Must Read” new releases. While including some young adult and children’s books by Black writers, it was largely geared toward secondary and college levels. Consequently, I added a more targeted “Supplemental List for Young Children and Young Adults.” Both lists were updated yearly and included in the packets.

As more public schools began to participate in the African American Read-In, some requested a way to validate their participation. I created a “Certificate of Appreciation Awarded to (insert name)” which was sent to those returning their report cards.

In fact, the first logo was a chain link of images of people with books walking. It was changed when a prominent Black writer pointed out that the logo evoked an image of Black people in chains as in slavery.

Originally, the African American Read-In was to extend from 1990 to 2000. It has grown and extended well beyond that and continues to grow both nationally and internationally. Growth is good, but its central tenet is not known by many and has been lost and co-opted by others.

Like the poet, Lucille Clifton, “i am accused of tending to the past/as if I made it…” I did not, as she further states in her poem. But I do believe it is important to know what informs our practices. Black people have had so much of our history lost, taken, and remade that it is imperative that we keep it accurate and claim it.

The African American Read-In was always focused specifically on reading works written by Black writers. The Black writer of the works was central. We wanted to broaden the knowledge about Black writers and their works. We wanted to stress the historical emphasis on literacy in the Black community. 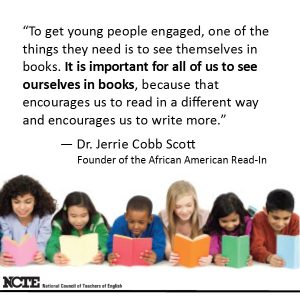