Around the year 2000, the University of Kansas hosted the African Studies Association International Conference, and I was delighted to be able to chat for a few moments with Derek Walcott, Nobel Laureate, MacArthur Foundation “Genius” Fellow, Guinness Poetry Award winner, Royal Society of Literature Awardee, Rockefeller Foundation Fellow, etc., etc. etc. Walcott was a keynote speaker at the conference that year, and regaled me with stories about the “real” Achille (pronounced “Ah-SHEEL,” he was quick to tell me) and Hector, fishermen he knew from St. Lucia and who provided some of the inspiration for his epic poem, Omeros—a work which spins its reader in a complex torrent of historical, artistic, and religious allusions, much in the way that the character Hector is spun about by the all-powerful sea. (Omeros was selected by The New York Times Book Review as one of the Editors’ Choice Best Books of 1990, and Michael Heyward of The Washington Post Book World applauded the publication as 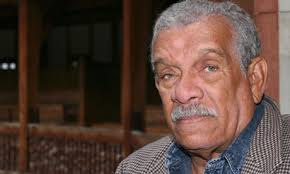 “Strenuous and thrilling… [with] a sense of unbridled imaginative scope, that feeling of amplitude and sensuous inclusion which we find in Homer—and a few other writers, Lucretius, for instance, or Shakespeare or Whitman—and which Walcott can summon as much as any poet now living.”) I had taught this impressive work for the first time the year before, and told Walcott about how committed I was to continue bringing it to the mindscapes of my KU students. They found it incredibly challenging, but also incredibly eye-opening.

I just received an email from one of those students this weekend. She wrote:

I was a student in your Freshman Honors English class at KU in 1999.  I was sad to see that Derek Walcott died this week and I was reminded of Omeros and your interesting Caribbean literature course.  I still have the book on my shelf.  Thank you for a great class that has stayed with me after many years.”

What more could any teacher ask for?

Derek Walcott was a truly marvelous wordsmith, long praised for his vibrant portrayal of Caribbean culture. Awarding him the 1992 Nobel Prize in Literature, the Swedish Academy remarked upon his “poetic oeuvre of great luminosity, sustained by a historical vision, the 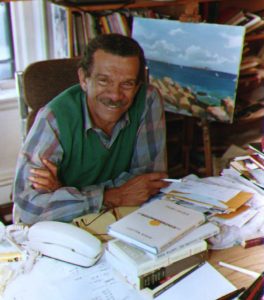 outcome of a multicultural achievement.” Critic Stephen Breslow commented: “In the manner of Joyce and Yeats, Walcott has merged a profound, rhapsodic reverie upon his [birthplace of St. Lucia]—its people, its landscape, and its history—with the … classical tradition of Western civilization.” The poet, playwright, and essayist commonly incorporated the European canonical texts of his formal (British colonial) childhood education while discussing the legacies of slavery, imperialism, and colonization in the Caribbean—legacies including cultural synthesis and creolization.

The adoption of African and European influences sometimes caused controversy, especially amongst pan-Africanists and Caribbean nationalists. Walcott did not engage in a wholesale rejection of the colonizer’s culture; neither did he fully embrace Africa as homeland. Rather, his writing insistently reflected his individual, familial, mixed-race background and a larger regional history. “A Far Cry From Africa,” one of his most commonly anthologized poems, manifests the tension as follows:

I who am poisoned with the blood of both,

Where shall I turn, divided to the vein?

I who have cursed

The drunken officer of British rule, how choose

Between this Africa and the English tongue I love?

Derek Walcott composed over 15 books of poetry, including Another Life (1973); Sea Grapes (1976); Midsummer (1984); The Arkansas Testament (1987); and The Bounty (1997). He was well versed in the dramatic arts, as one might expect of a man whose mother was a schoolteacher and staged Shakespeare productions for the local community during his youth. He founded the Trinidad Theatre Workshop in 1959 and served as its director until 1976 (and is thus often claimed as an honorary Trinidadian). Of his 30+ plays, the best-known include The Sea at Dauphin (1954); Ti-Jean and His Brothers (1958); the Obie Award-winning Dream on Monkey Mountain (1967); and The Odyssey: A Stage Version (1993). And his tremendous eye

for beauty and drama in the natural landscape can also be witnessed in his visual art. For images of his oils and watercolors, click here.

Derek Walcott. He will be sorely missed. 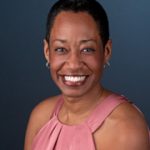 Dr. Giselle Anatol is a professor and Director of Graduate Studies in the Department of English at the University of Kansas. Her areas of specialization include contemporary Caribbean women’s literature, African American literature, and children’s literature.