Either indirectly or directly, all of you are responsible for creating the political climate that encouraged American citizens, with the help of the Electoral College, to elect President Trump.  In the spirit of trying to perpetuate  a liberal democracy , citizens voted.  A number of feel cheated. We have been cheated as  the MAKE AMERICA GREAT AGAIN mantra resounds throughout  the United States. In this Republic, which can  be little more than  a metaphor for democracy, we are dismayed that the number of popular votes for a candidate counts for naught.  We shall continue to vote, especially in local and state elections.  Mark my words.  Some of you may wish to apply for one of  the jobs your President has vowed  to bring back to America. The grapes of wrath shall bloom.  Some of you shall lose your seats. 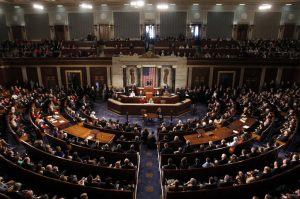 Those of you survive ought to attend to the work of restoring a modicum of confidence in the political process.  American citizens are not ancient Romans in need of a circus. “The virtues of our system of federated governments, ” Carl L. Becker wrote in Freedom and Responsibility in the American Way of Life (1945), are indeed very great” (93).  Noble words.  Becker was aware, however, that “the most striking defect of our system of government is that it divides political power and thereby  conceals political responsibility.  The business of governing is entrusted to the President and the Congress, but it too often happens that no body of elected representatives can be held responsible or called to account for the formulation of policies or the enactment of measures to carry them through” (95).  The defects you have been complicit in sustaining since 2000 have encouraged the slipping of democracy into fascism.  In his first address to Congress, Trump made it clear, even unto the deaf, the dumb, and the blind, that such slipping is at the core of his political ideology.  Weight his propositions.  Do not pretend that you have not been warned.

The minority of Congresspersons who refuse to dirty their minds and hands with bad faith can profit from reading Fatal Invention: How Science, Politics, and Big Business Re-create Race in the Twenty-first Century (2011) by Dorothy Roberts.  She has made a principled, comprehensive analysis of how President Trump’s dedicated racialization of our nation is a choice that, with your help, can destroy democracy.  In her conclusion, Roberts provides a logical warning:

Will Americans continue to believe the myth that human beings are naturally divided into races and look to genomic science and technology to deal with persistent social inequities?  Or will they affirm our shared humanity by working to end the social injustices preserved by the political system of race?  This is the most pivotal question facing this nation in the twenty-first century because the answer will determine the basic nature of the relationship between citizens and the government and with each other.  One path is already leading to aggressive state surveillance, extreme human deprivation, and unspeakable brutality against whole populations on the basis of race. By obscuring this coercive control over poor communities of color, the new racial biopolitics permits the growth of a state authoritarianism and a corporatized definition of citizenship that endangers the democratic freedoms of all Americans.  We must chose the other path of common humanity and social change if we are to have any hope for a more free and just nation.” (312)

Heed her warning.  Either weed the garden or allow it to grow into a negative Eden of implacable dread.