The previous passage is taken from the “Preface” of Sister Circle, the 2002 collection that celebrates works produced by Black women scholars. In the celebratory fashion of Sister Circle and as we close out Women’s History Month, today’s blog space is dedicated to women of color who were among the early faculty members at the University of Kansas.

Mildred Watson earned a B.S. from Lincoln University, a historically black college in Missouri, in 1942 and a Masters in 1954. She devoted 13 years of service to KU as an Assistant Professor and later as an Associate Professor of Social Work from 1963 – 1976. In 1984 she was appointed as the first female commissioner of the juvenile division of the Jackson County Circuit Court. She died as the age of 82 July 1, 2005, in Florissant, Missouri.

In 2004, Mary Townsend was recognized for her 21 years of service to KU by The Emily Taylor Center for Women and Gender Equity. At the university from 1969 – 1987, Townsend served the college community in several capacities. While she started as a secretary, she would later become a tenured professor in 1971 and later the Director of Minority Affairs, now known as Office of Minority Affairs. By the end of her career at the university, in 1987, she was an emeritus professor. 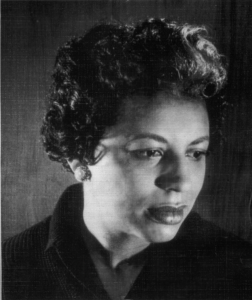 HBW would like to thank Deborah Dandridge at Spencer Research Library for her research assistance while drafting this piece.