“Ntozake is gone.” announcement in a FB post, by Pamela Sneed, on Oct. 27, my fingers spasmed “what?” then (sobbing) i rocked myself with arms wrapped around myself wanting to vomit this pain, this no no no not Ntozake at age 70 too early my brain hiccuped. This is personal.

This . . . loss, like a few other herstorical deaths, slits me down the middle and feels like all my innards are pouring out (steaming, slippery) into my hands as i sit here trying to make meaningful guttural sounds on paper. This hurts like “Stop all the clocks” and all the rest of that poem (W.H. Auden’s).

Just thinking of the volcanic outpouring of words and ink, i want(ed) to sit down and be still and very, very quiet (“stfu”). To honor one of the world’s most innovative, original writers, there will ironically be an avalanche of much mediocre writing, collective excessive self-reflexive, narcissistic hyperbole (we can’t help ourselves); overstated clichés and even accidental plagiarism (of each other), including, probably, this piece.  (Sorry.)

Possibly everything we need to say about Shange has already been said in her manifesto “i talk to myself” (in her 1978 book Nappy Edges, 19-26).  Please go read that piece. As well as the rest of the book.  Including “for all my dead & loved ones” (97-8).

Still. This is personal. 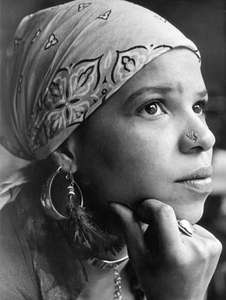 Ntozake’s eclectic educational innovations – brain hurting allusions to international musicians, artists and current political events. Intentionally, constantly expanding her definitions of “cullud.” Ntozake was an unprecedentedly exuberant wordscrafts-person, merging styles and content to passionately create her own language(s) unique in rhythms and appearance that sometimes seemed sloppy, incidental even incoherent yet evry time i red or thot about her work my brain wld do somthin hapy & erratic like this. (This is personal.) She exemplifies the writer as transformative “trailblazer” artist / activist / change agent and visionary.

It feels like i knew her in the mid 1970’s or almost did (but not really) and i always thought of her as several years younger than i and now look – she is three months older.  Essentially, we are both 70.  Our generation is 70.

i was not, exactly, in those circles but rather in the perimeter one swept up in tsunamis of awe, admiration and proclamations meaning, “Wow. ‘Zake. She did that! Thank you! So much.” i was, at least, in the same town, Los Angeles. This is personal. This is political. This is, also, global, universal.

Ntozake was and is a (performance) dancer- poet. Period. After my Soque Street Northeast Georgia Communities, Zora Neale Hurston, Toni Morrison and Nikki Giovanni, Ntozake was – among contemporary writers – a main early influencer on my poetry. (Well no, not the lowercase i.  i did that at Paine College in 1968.)

She affirms the realities, cultures dreams and visions of blackwimmin and blackgirls in a way not done before or since. Unprecedented. Our language, appearance, styles, skills; cosmologies, beliefs, practices . . . (This really is personal.) She wrote and lived her interview words, exemplified her observation; proclaiming the centrality of us as in  “How can I be marginalized if I am the center of my own world?” For sure, i agreed, God is a Black Womon! (u tell um, Ntozake.)

And another thing. i saw that FB post, and was absorbed into the visceral amoebic e-catharsis of self-indulgent techno-emotions; slipped into a maelstrom of grieving emotional contagion,  posts from “Elder” heterosexual male writers, to young Trans activists, all (us) lamenting, praising, crying, and so on.  i found and posted two obit- articles (Essence and Ebony) and had to shut down, as i said.  Because, this is personal. But also, as in, whatchu mean, “gone”? we just gotcherewe just got started!”

So. Trying to not be but still being, just another one pouring emotions from this pen / literally i am writing this by hand / straddling decades of memories swift moving visions & wraiths, in honor, in celebration  of  Ntozake for her creative colossus poetic being (African, American & European literary styles merged in her writing) straddling our worlds, riding on in to her rest / at the end, at this almost-end, of our collective rainbow.

And like Mary in Octavia Butler’s Mind of My Mind, Ntozake seemed to be the nexus creator of a network, a “pattern.” Like the two necessary-for-life sisters who lived near each other in Gloria Naylor’s Mama Day, we seemed to ask her, “You there, sister?” Ntozake Shange did it her way, as in Nina Simone’s rendition of “My Way.” And “She was loved,” like Pilate Dead sang at the funeral of her granddaughter in Toni Morrison’s Song of Solomon. And she will be loved, always, Dear ‘Zake.

1987 Interview by Brenda Lyons in the Massachusetts Review 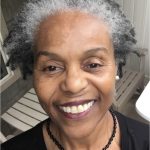 doris davenport is a writer, educator, and literary and performance poet from Northeast Georgia. davenport has published book reviews, articles, essays, and is the author of ten books of poetry.