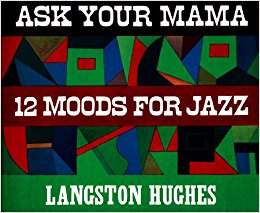 It might be argued that Langston Hughes’s Ask Your Mama: 12 Moods for Jazz (New York: Alfred A. Knopf, 1971) can make readers more attentive to combinations of words and music and to the issues of response and interpretation broached in Stephen Henderson’s Understanding the New Black Poetry: Black Speech and Black Music as Poetic References (New York: William Morrow, 1973). More recent critical discussions of musical and verbal aspects of African American poetry extend the thinking Henderson initiated, but they do not displace the centrality of his formations in the development of theoretical discourses.  We have yet to sufficiently critique his insights about how  “mascon” (a massive concentration of Black experiential energy) informed African science and currently informs “the meaning of Black speech, Black song, and Black Poetry” (44).  Henderson’s considerations of origins play nicely against the laughing barrel, signifying humor of Hughes’s liner note entitled “Jazztet Muted”:

Because grandma lost her apron with all the answers in her pocket (perhaps consumed by fire) certain grand- and great-grandsons play music burning like dry ice against the ear.  Forcing cries of succor from its own unheard completion  — not resolved by Charlie Parker  —  can we look to monk or Monk?  Or let it rest with Eric Dolphy? (92)

For Hughes’s blues-jazz composition, Dolphy, Monk, Ornette Coleman, Dizzy, Duke, Ella, Miss Nina, Carmen, and Hawkins revolve in the orbit of Charlie Yardbird Parker, but John Coltrane (1926-1967) remains unnamed (not called for or evoked) “in the quarter of the Negroes/where black shadows move like shadows”(77); the absence of Coltrane may be a cultural comment rather than an oversight.  The tacit comment, of course, signals the limits in Hughes’s imagination of the space that consciousness of theoretical science should occupy.  When Hughes wrote Ask Your Mama, a brilliant example of what jazz poetry can be, Coltrane had yet to be embraced by many black music aficionados with a love supreme; a handful of Coltrane’s fellow musicians might have overtly appreciated his sustained interest in physics, although good musicians intuit physics in their improvising. 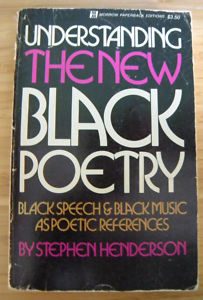 The embrace did manifest itself, three years after Coltrane’s death, with the publication of Michael S. Harper’s Dear John, Dear Coltrane (Pittsburgh: University of Pittsburgh Press, 1970), as seminal a work as Ask Your Mama.  Joyce Pettis has noted that in Harper’s collection we can find “a force crystallizes and spirals in an unanticipated form.  John Coltrane is this force, negating violence and death through his inimitable music and answering hate with a love supreme through which he enables the survival of others more than himself” (African American Poets: Lives, Works, and Sources.  Westport, CT: Greenwood Press, 2002, p. 145).  Such books as Lewis Porter’s John Coltrane: His Life and Music (Ann Arbor: University of Michigan Press, 1989) and Coltrane on Coltrane: The John Coltrane Interviews (Chicago: Chicago Review Press, 2010), edited by Chris DeVito, and John Scheinfeld’s documentary CHASING TRANE (2017) signal a need to study Coltrane as more than a reference in African American poetry.   Harper gave birth to brightness.  Coltrane and his music radiate in the realm of jazz poetry.  The import of such radiance is explored in Stephan Alexander’s The Jazz of Physics: The Secret Link Between Music and the Structures of the Universe (New York: Basic Books, 2016). 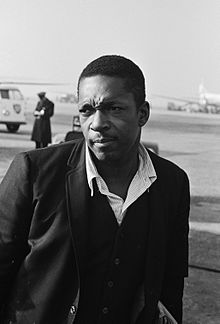 Just as Coltrane was in the shadows of attention in Ask Your Mama, Asili Ya Nadhiri’s innovative poetry (tonal drawings in poetic form) remains in the dim shades of black literary history and is known mainly by those who read his website  (http://www. nadhiriwrites.com) or one of his postings on Facebook, or who have read his chapbook the inner recesses of an abandoning life (2004) and listened to the 39 tracks on its appended CD.   The reason may be that his poems do not appear in widely circulated journals and anthologies.  He is mentioned in neither of the influential anthologies of innovative poetry edited by Aldon Lynn Nielsen and Lauri Ramey, Every Goodbye Ain’t Gone: An Anthology of Innovative Poetry by African Americans (Tuscaloosa: University of Alabama Press, 2006) and What I Say: Innovative Poetry by Black Writers in America (Tuscaloosa: University of Alabama Press, 2015).  A single poem, “hustling our absurdings in place,” appears in Black Gold: An Anthology of Black Poetry (Savannah: Turner Mayfield Publishing, 2014), edited by Ja A. Jahannes.  Some Chinese readers know of his work from Wang Zuyou’s “Tonal Drawings Written in Poetic Form? –An Interview with Asili Ya Nadhiri.” Foreign Literature Studies 37.5 (October 2015): 1-9, or from my lecture on his poetry at Central China Normal University in September 2011.  There I argued that (1) Nadhir’s poems exploit transitions and transformations in new representations (words) to describe the experience of time and (2) ) his work is a continuing effort to forge a new performance genre that integrates theme and thought (the word, poem, text) with musicality (activation of the poem in highly rhythmic renderings that may or may not involve instrumental music) and the visual (typography). His uniqueness is not found on the page; it must be discovered by pondering the significance of his creative process, his aesthetic. In that lecture are seeds that may eventually become an essay on tonal drawings as innovations.

Of course, Nadhiri is but one of hundreds of unsung innovative American poets.

His affinity with jazz musicians, including Coltrane, and his sustained thinking about the explanatory limits of physics warrant our giving more attention to the body of his work and, thereby, expanding literary histories.  So too do the parallels in his poetics with, in the words of T. J. Anderson III, an ethnomusical tradition “that uses several of the standard musical tools of jazz to craft a work that is distinctly individual while also voicing the collective consciousness of the African diaspora” (Notes to Make the Sound Come Right 174).  The second stanza of Nadhiri’s recently issued tonal drawing  “so hastily demising” brings the right sound to the ear:

Keeping in mind Stephen Henderson’s critical categories of theme, structure and saturation, we might use this stanza to begin inquiry about points of origin in science and music relevant to Nadhiri’s creation of a new genre; more precisely, we might ask crucial questions about African American creative processes which delineate a genre of being and thinking as works of art.