I last delivered a paper 20 years ago: an academic talk as an undergraduate fellow with the Associated Colleges of the Midwest (ACM). I discussed the contributions of Langston Hughes and Zora Neale Hurston to the Harlem Renaissance. Since then, I’ve raised a family and worked in public education. The thought, then, of presenting at the College Language Association’s annual conference caused a bit of trepidation. I doubted my abilities, unaided by requisite practice, had improved with time. In fact, I suspected they were rusty, more than anything, and might cause me embarrassment. Still, I submitted an abstract about my humble (this adjective cannot be overstated) examination of Showtime’s infatuation with the south side of Chicago, and much to my surprise, was invited to present during the 78th annual CLA convention’s as part of the New Scholars Panel. The presentation went well, as did the talks I attended by several of my peers that week.

Poet Nikky Finney, though, proved the highlight of my CLA experience. The National Book Award winner spoke during a luncheon for the Langston Hughes Society (LHS), which meets in conjunction with CLA. I hadn’t purchased a ticket for the event, but LHS members let me listen to her speak. She read “Yella Gal,” a poem from a yet-to-be-released book, then moved on to her thesis for the afternoon, “The Herocity of Langston Hughes.” She spoke of heroes and mountains, of growing up “in a house where Black History Month was every day of the week,” and of becoming a poet. “Writing was an act of faith to Langston Hughes,” she said. “Writing was becoming an act of faith to me.”

Her words, this last quote in particular, reminded me of the summer I spent immersing myself in Hughes and Hurston. I poured over their autobiographies, novels, plays, and volumes of poetry. I scoured page after page of Simple stories and reread Their Eyes Were Watching God in search of just the right quotes for my essay. Like Finney, writing was becoming an act of faith for me then. Bittersweet emotion swelled up inside me as I sat there listening to her that afternoon: sadness for somehow having lost faith in the act of writing and gratitude for having found it once more. Later, after buying a book, Head Off & Split, and waiting in line for Finney to sign it, I thanked her for reminding me of my faith. “Come on home,” she said. 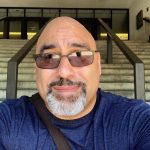 Vince Omni is a creative writing student in the MFA program and teaches first-year composition at the University of Kansas. He manages HBW’s fiction acquisitions and helps develops content for the Black Literary Suite and blog.