Alexander, Stephon.  The Jazz of Physics: The Secret Link between Music and the Structure of the Universe.  New York: Basic Books, 2016.

In her 2007 poem “In Search of Grace,” Quo Vadis Gex Breaux makes an elegant plea for an enabling virtue.  Those lines which trigger my imagination are

I pray for grace, as I

as I scale the stairs to my

mind’s attic or descend into

its dark and eerie cellar.

The well-spun metaphors have the  simplicity that Stephon Alexander associates with “the very aesthetics of doing theoretical physics research” (54) in The Jazz of Physics.  He suggests:

Alexander’s book demonstrates how grace can be a distinguishing feature in an autobiographical discourse on science and art, on the multiple crises of knowing in his own dedicated explorations of quantum physics and the stern discipline modeled by such jazz musicians as Ornette Coleman, John Coltrane, Yusef Lateef, Nicholas Peyton and Thelonious Monk.  Remarkably readable, the book invites us to abandon stereotypes.  Even if  one complains silently, as I do,  that Alexander doesn’t overtly contextualize the history of physics within a larger, less optimistic history of human struggles, one admits that his narrative is a special achievement.  Alexander  doesn’t engage some ethical failures in the practice of science, and that absence is the price a writer who focuses on craft must often pay.  But Alexander does make redemptive suggestions what can be exceptionally good in the dropping of knowledge in certain forms of hip hop intellectualism, particularly “in the form of battle rapping” (21). 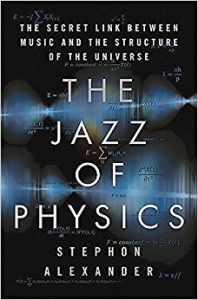 It is sufficient that The Jazz of Physics excavates buried dimensions of African American genius and validates Albert Murray’s contention that “antagonistic cooperation” is responsible for the superiority of jazz. (231) Alexander ‘s conclusion is an inspiring summation of dancing, climbing, and descending:

My journey to reconcile jazz with physics serves as a living example of how a small group of physicists, in the spirit of the jazz tradition, embraced me and allowed me to improvise physics with them, while challenging me to go beyond my limits. (232)

Fair enough.  But what really needs to be transmitted to students and pondered by all of us who are frustrated by the motions of the universe is Alexander’s elegance regarding education —-

Present-day students are trained in the precise calculations bred from these ancient   philosophers —the elliptical orbits of Kepler, Newton’s gravitational laws, and Einstein’s more complex space-time calculations.  What students of the future will be studying is a complete unknown.  Education, technology, and global interconnectedness are all developing at enormous rates.  For the student to keep up, for the researcher to discover new truths, and for the professor to lend guidance and insight, it may take a combination of ideas from ancient and modern-day philosophy, as well as creativity and improvisation, with the boldness to make mistakes (84).

Yes, the quest for grace and  discipline of mind rather than applause for the gyrations of the  behind ought to fill our time and space.