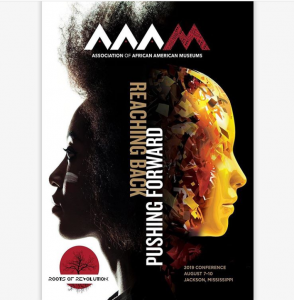 The Association of African American Museums Conference, “Roots of Revolution: Reaching Back | Pushing Forward,” took place from August 6 – 10, 2019 at the Westin Hotel in Jackson, Mississippi.   Attending this conference near my hometown in Mississippi gave me the opportunity to visit family and witness one of the most well-organized and insightful Black-centered events I’ve ever seen, complete with resourceful sessions, valuable information on preservation, effective “Speed Networking Mentorship” rounds, and, more importantly, free ice cream scoops from Ben and Jerry’s, who remains invested in social justice efforts.  Although this conference showcased museum-related information, it attracted people from a wealth of specialties, creating a wide-range of innovative ideas about cultural preservation of African-derived cultures.

“Reaching Back|Pushing Forward” was a fitting focus for this conference because of its major attention to preservation and digital humanities. Adam J. Banks, a former KU Langston Hughes Visiting Professor, writes in “Looking Forward to Look Back: Technology Access and Transformation in African American Rhetoric,” the lives of Black people have been changed due to technology. This conference reflected this as it engaged participants in the various ways digital humanities offers for preserving Black history and changing the fabric of cultural knowledge for a more inclusive future.

The “pre-conference” began on Tuesday with a Digital Humanities Afro-Futurism Workshop, where Maryemma Graham, founding director of the Project on the History of Black Writing, and Bryan Carter, former president of the Association of African-American Museums, answered the question “What is a Digital Humanist?” Next, the Opening Plenary discussion on Octavia Butler’s Kindred took place. Featuring Julian Chambliss, Professor of History at Michigan State University, Ytasha Womack, award-winning Afrofuturist author, John Jennings, Professor of Media and Cultural Studies at the University of California, Riverside, moderated by Ayofemi Kirby, a communications professional from Harvard Extension School’s division of Museum Studies, this discussion was one of the most powerful moments of the conference. The conversation among these four scholars brilliantly connected the core of Afrofuturism to present communal practices of knowing and healing that centered racial identity and historical memory through an interactive fishbowl conversation. Womack made sure the audience understood the essence of Afrofuturism, and she admitted that even though the term was coined by white cultural critic Mark Dery in 1993, Black people are the ones taking up the Afrofuturist aesthetic and carrying it forward. Afrofuturism’s expression of African diasporic technoculture often employs ancient cultural mythos as a shaping mechanism for the visions of the future, especially expressed through science fiction, art, spirituality, and music.  “The present is very interdimensional” Womack explained, “[Afrofuturism is] a healing practice as a communal healing from the limitations we’ve been indoctrinated with.”

Discussions around healing from trauma surfaced often in the Kindred discussion and was reiterated throughout the conference– thinking about preserving Black culture seems to carry the weight of traumatic experiences with it. In expressing the physical and spatial trauma of Dana, the protagonist in Kindred, Chambliss concluded “trauma is a part of the way African Americans negotiate the right past” in the midst of a dehumanizing situation. To this point, Jennings mentioned how the Black people were the technology of slavery, and the cotton gin was the “upgrade” that replaced them. “What does it mean for Black people to yield power over the technological space while not being used as technology?” Jennings inquired, “technology, systems, agency. Stories are technology, too, they’re how we make meaning of the world.” This conference centered on the healing process of Black people and the need to take control over their own stories in technological spaces.

On Friday, the conference luncheon speakers consisted of a panel of acclaimed writers Sonia Sanchez, Charles Cobb, Jr., Robert “Bob”Moses, and Ericka Huggins, moderated by social activist and author Patrisse Cullors. They discussed the multi-generational commitment to uplifting individual and collaborative advancements of truth and reconciliation through activism, education, and mobilization. Sanchez received a standing ovation when she presented a moving tribute to Toni Morrison, whose untimely passing on the opening day of the conference gave us all cause to pause.

No matter where one entered the conference, technological inclusion was a part of the conversations of cultural conservation. Presenters discussed how to find ancestry through school records, census records and land records, and other places we may not have considered.  During one networking session, Graham proposed that the folks in the room take up the name DIGIN [Digital Inclusion Group Initiative] to provide an ongoing collaborative space for the development of digital projects. In the same session, one person in my group gave me an augmented reality coaster, with an app for a virtual animation of the Union Mills Homestead, a historic grist and saw mill which was later turned into a public museum and county park. Museum and cultural preservation organizations aren’t stuck in a particular time and space. Rather, they are using technologies to enhance the act of conservation and their engagement with public audiences.

In African American Rhetoric(s), Adam Banks suggests that the “digital divide, or technology access more broadly, is primarily a rhetorical problem, or at least as much as it is a material one.” When “reaching back to push forward,” current technology is employed to reveal new areas of history that have been erased by cultural hegemonies. Entities like HBW’s Black Book Interactive Project are reaching back to recover black texts and expanding the ways in which we use Black artifacts in academic and public spaces. As we move forward, history also moves forward with us and affects current ways of interpretation and meaning. This AAAM conference provided great professional development and new networking opportunities for people interested in Black cultural preservation work that reaches into the past in order to pave innovative ways into the future. 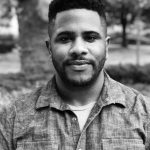 Christopher Peace is a doctoral student of rhetoric and composition at the University of Kansas. Some of his academic interests include African American folklore, myth and rituals, ecocomposition, and the rhetoric of place and space. At HBW he is a member of the Black Book Interactive Project and Black Literary Suite teams.​